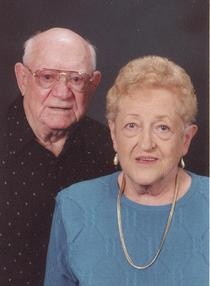 George Devere Haskell, age 89, passed away Sunday, May 26, 2014 at Fairwinds at Sand Creek in Idaho Falls, Idaho.  George was born in Sublett, Idaho on February 22, 1925, to Raymond Levi and Sarah Horn Haskell. The Raymond Haskell family moved to Rockland, Idaho where George attended school.  George entered the United States Navy, where he proudly served from 1944, to being Honorably Discharged in 1946. On October 23, 1949, George married Verla Rae Hartley. George and Verla Rae had two children, Sherrie Denise, born in 1952, and Kevin James, born in 1955. After having been married for 64 years, Verla Rae passed away on January 30, 2014.

George is survived by his daughter Sherrie (Chuck) Cox, and his son Kevin (JoLynn), a sister Lola Mae (Theron) Stokes and a brother, Carl (Ilene).  George is also survived by four grandchildren and their spouses and six great grandchildren: Jessie (Travis) Kendall and daughters Kyla and Alyssa; Sara (Ben) Nally and sons Logan and Tristan; Justin (Amber) and their son Brayton and Amanda (David Braden) and their daughter, Laela Min; as well as many nieces and nephews.

Preceding George in death were his parents, Raymond and Sarah, 3 sisters, Lucille, Ada, and Erma, and 3 brothers, Daniel, Alvin and Ivan.

Family and friends are welcome to help celebrate George’s life by attending a viewing Saturday May, 31 at 10 a.m. at Davis Rose Mortuary in American Falls located at 170 Idaho Street.  Following the viewing, a graveside service will be held at 11:30 a.m. at Valley View Cemetery in Rockland.

Following the graveside service, a time of fellowship will be held, and a light lunch provided at the American Falls Senior Center located at 180 Idaho Street.

To order memorial trees or send flowers to the family in memory of George Devere Haskell, please visit our flower store.