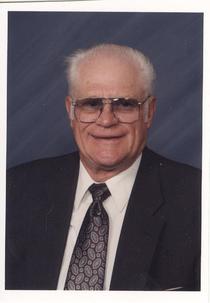 George Summers, 86, passed away Wednesday, January 7, 2015, at the Portneuf Medical Center. George was born October 17, 1928 in Avon, Utah, to Ivan Alvord Summers and Elizabeth Ann Knowles. He was the second of six children. He attended school in Paradise, Utah and South Cache High School.

George entered the Army November 14, 1950. He was stationed in Germany during the Korean Conflict. After being honorably discharged he attended one semester at Utah State University.

George worked as a welder machinist, starting for T.S,. Vanmderford. He worked out of the same shop for 41 years.

He was a member of The Church of Jesus Christ of Latter-day Saints and held the office of High Priest. He had many callings in the church, his two favorite being Scouting and Sunday School President.

George enjoyed fishing, hunting, camping and being with family.

He is proceeded in death by his parents, a half-sister Cleo Mollinet, two sisters Ilabeth Young and Mary Nelson; and two brothers Ivan Summers and Riley Summers.

To order memorial trees or send flowers to the family in memory of George Wayne Summers Sr. , please visit our flower store.
Send a Sympathy Card