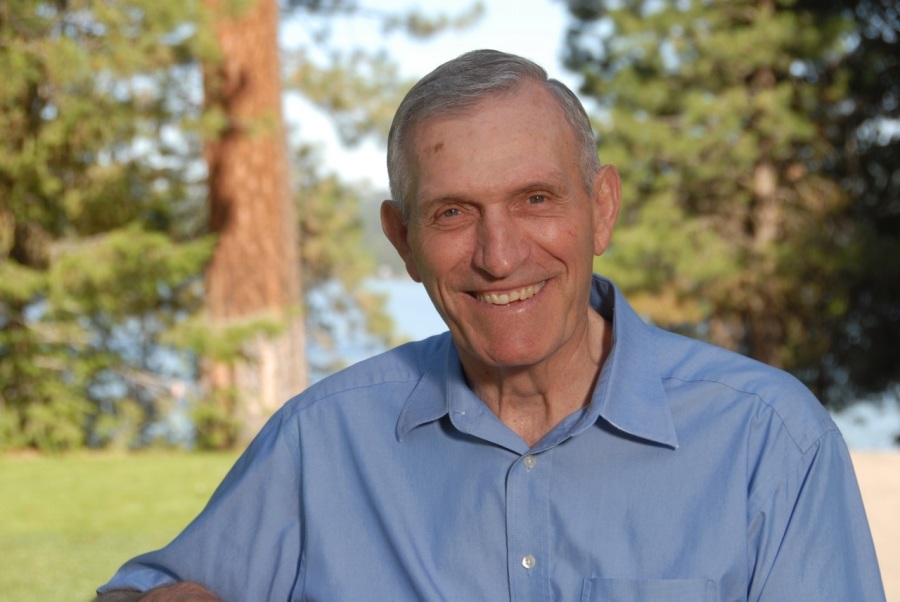 After 84 years of a life well lived, Gerald Martin Fehringer passed away of natural causes on September 13, 2019.  Gerald was born on October 2, 1934 in Peetz, Colorado to Leo and Angela (Zach) Fehringer and was the seventh of 10 children.  He graduated from Peetz High School in 1952 and took delight in telling his children and grandchildren that he graduated in the top 10 of his class, often omitting the detail that there were only 10 students in his class.  After graduation, he worked and farmed until he served in the army from 1957-1959.

After his honorable discharge from the army, he moved to Idaho to farm with his brothers.  Prior to his move, Gerald’s cousin had introduced him to her roommate, Marion Degenhart. He faithfully wrote her letters describing his adventures and activities in Idaho.  In 1960 he married Marion in Sterling, Colorado.  Gerald and Marion made their home in Aberdeen, Idaho where Gerald continued to farm.  In 1967, they moved to American Falls (they were tired of picking rocks) and continued to build a successful farm east of town with his brothers.

He and Marion raised six children.   They were strong supporters of education and were proud that all six of their children earned degrees from Idaho State University.  Their union was filled with love, support, faith and family for over 50 years until Marion’s passing in 2010.

Gerald officially retired from farming in 1995 when his son, Burt, took over the family farm.  Although he was “retired” he loved farming and continued to help however needed.  He enjoyed making birdhouses, picture frames and other treasured items for family and others.  Gerald loved sports and was an avid supporter of American Falls athletics and ISU sports.   In 1999 he was named “Fan and Supporter of the Year” for American Falls sports teams and was honored at the state basketball tournament in Boise.

Gerald touched many people’s lives throughout his lifetime, not only as a loving husband, father and grandfather but also through his service to others.  His was extremely active in Lions Club for 48 years where he served in various leadership capacities, including president, and was instrumental in helping to obtain and remodel the American Falls Senior Center building.  He participated in many Lions Club service projects and attended state conventions. One project he was very proud of was helping to bring the Lions Quest program to the American Falls School District.  He also served on the Falls Irrigation Board, was a member of the Potato Growers of Idaho and was state of Idaho representative to the National Potato Promotions Board. He was on the board of directors for the American Falls Christian Youth Ministry, a Power County Wheat Growers Board member, and served on the American Falls Senior Center Board before he was a senior citizen. Gerald lived his faith and was an active member of St. Mary’s Catholic Church.  He was a former parish council member and president and served on the finance council.  He also helped with maintenance and various remodeling projects.

In recognition of his service, Gerald received the Melvin Jones Fellow Award for Dedicated Humanitarian Services from Lions Club International.  This is the highest honor awarded and is given to those who uphold the “Lions Code of Ethics” and give selflessly to their community.  He was elected into the Idaho Water Users Association Hall of Fame and honored as one of the Channel 8 News “Eight Who Make a Difference.”  In 2004 the American Falls Youth Center was moved to a new location and was re-named The Gerald Fehringer Youth Center.  This honor was given because Gerald was a charter member of the board of directors, a long-time president and his dedication, work and love for the youth of American Falls was evident through his many years of tireless support.   In 2006, Gerald received the “Service to Education Award” from the American Falls Education Foundation. Gerald was also honored as Grand Marshall of the Power County Stampede and American Falls Day Parade in 2007 and received the Citizen All-Star Volunteer Award in 2011 for American Falls Day.

One fellow Lions Club member once said, “If there is a way to describe Gerald, it is that when there is a need, he is the first to come and the last to leave.”  Gerald was respected by all who knew him and deeply loved by his family.

His children feel truly blessed that God chose him to be their dad.  Gerald and Marion provided an authentic example of a loving and life-long marriage.  Gerald passed on to them his devout faith and love of God.  He helped his children develop a strong work ethic.  He showed them that it is possible to be thrifty yet extremely generous.  He demonstrated that loving and serving others is the highest calling a person is given.

The Mass of Resurrection will be celebrated at 10:30 a.m. on Saturday, September 28th at St. Mary’s Catholic Church, 352 Roosevelt St. in American Falls.  Interment will follow at the Falls View Cemetery.   A luncheon will follow interment at St. John’s Lutheran Church.  The rosary will be recited at 7:00 p.m. on Friday, September 27 at St. Mary’s Catholic Church.  A small reception will be held at the conclusion of the rosary in the church basement.  Memories and condolences may be shared at www.davisrosemortuary .com

In lieu of flowers, memorial contributions may be made to:

To order memorial trees or send flowers to the family in memory of Gerald Martin Fehringer, please visit our flower store.