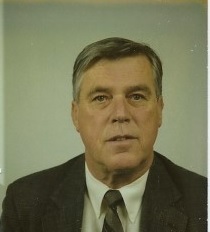 Glen Huff passed away September 7th at his home in American Falls.  Clifton Glen was born in Spanish Fork, Utah October 9, 1934 to Clifton and Marie Williams Huff.  Glen worked hard on the farm and at the family owned restaurant, the Oak Crest Inn.
Glen graduated from Spanish Fork high school in 1953.  A talented athlete, he played football, baseball and basketball, was co-captain of the football team, active in student government, president of the Spanish Fork chapter of FFA and state reporter.  He attended BYU on a baseball scholarship, graduating in 1957 with a business degree.  During the summer, he played first base for the Spanish Fork city semi-pro baseball team.  After a stint in the army, Glen married Arlen Johnson in 1958.  This union brought three daughters (Allison, Susan and Kristen) and finally, a much-wanted son, Mark.
Glenâ€™s dream was realized when, at age 38, he became the youngest owner/dealer in Chevrolet franchise history and Glenâ€™s Chevrolet of Pocatello was born.
Later that year, he married Joann Gittens and gained another son, Bob.  He and JoAnn worked side by side and Glenâ€™s Chevrolet earned   numerous national awards. Glen was a proud Bengal booster, supplying cars to coaches, supporting ISU athletics and many community events.
Glen and Joanne loved travelling to China, Greece, Turkey and Africa.
Another dream was realized with the purchase of a beautiful rolling hilled ranch they called â€œGlenhavenâ€ in American Falls. They bred and raised national champion Registered Polled Herefords, showing them all over the United States. Glen loved having grandkids visit and fish at his stocked pond.  Although he didnâ€™t always say it, he cherished his family.
Perhaps Glenâ€™s riskier bucket list wish was earning his pilot license, purchasing and flying his own helicopter until he crashed it.
JoAnn died in 2006.  Glen married Linda Walker in 2008.  They shared great passion along with being good friends and many happy family milestones were celebrated at the homestead. As Glenâ€™s health declined, Linda became a full-time caregiver and the couple relished each otherâ€™s company with Linda talking and Glen listening.  Glen was a big man, a rock and his laughter will be missed.
He was preceded in death by his sister, Ann Banks, parents Cliff and Marie Huff and wife, JoAnn.
He is survived by his wife, Linda, American Falls, ID; his children, Allison Mack(Tom) of Albuquerque, NM, Susan Boyle(Dan) of Henderson, NV, Kristen Johnson, of Sandy, UT, Mark Huff (Deidre) of Eugene OR, step-children, Bob Kamayer , Michelle (Jim) of Pocatello, ID & Michael Burr of Las Angeles, CA, 15 grandchildren and 12 great grandchildren.
Visitation will be Thursday, September 14th from 6-7pm with a service from 7-8pm at Davis Rose Mortuary in American Falls.  In lieu of flowers please donate to the Bannock Human Society or charity of your choice.

To order memorial trees or send flowers to the family in memory of Glen huff, please visit our flower store.