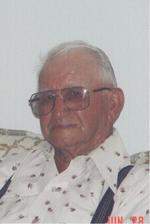 Glenn Alma Anderson, 95, of Aberdeen, Idaho returned peacefully to his heavenly home on August 17, 2011 surrounded by his loving family.  Glenn was born to Charles Otto and Emma Lavina Anderson on April 19, 1916 in Malad, Idaho.  He was the 6th out of nine children.  He married Velma Kendall on June 28, 1938 in Pocatello, Idaho.  They were later sealed for time and all eternity in the Idaho Falls Temple on March 25th 1953.

Glen spent his life logging, farming, and running sheep all in the Aberdeen area.

He spent 32 years with the Walt Vanderford sheep company.  There were many happy memories in Palisades for Glenn and Velma and their many children and grandchildren.  After he retired he worked part time in the spring and fall for County Line Farms in American Falls, Idaho.  He loved to go out and drive the tractor.

In Glenn’s later years he spent many happy days camping and fishing in Mackay with his children and grandchildren.  He and his brother Earl would see who could catch the biggest and most fish.

Glenn is survived by his wife of 73 years Velma, his three children and their spouses and his 64 grandchildren.  He is preceded in death by his parents, grandparents, 8 siblings and 1 grandson Skip Fisk.

You will be greatly missed by all of us and we look forward to the day when we will all be together again with you in the great beyond.

The family would like to express their thanks to the girls that helped from Access Hospice.  Your Loving care of Glenn meant very much to the family.

Condolences and memories may be expressed at www.davisrosemortuary.com.

To order memorial trees or send flowers to the family in memory of Glenn Alma Anderson, please visit our flower store.