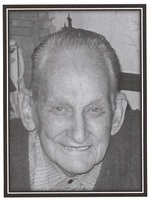 AMERICAN FALLS - Gordon Glen Meredith, 90, passed away Wednesday, June 13, 2012 of injuries from a fall, resulting in broken ribs and pneumonia.
Gordon was born February 6, 1922 in Donalda, Alberta, Canada to Glen and Merle (Sterns) Meredith.  He was the oldest of five children.  After their home burned down, his family came to visit friends in Coeur d’Alene, Idaho and decided to make that beautiful area their home.  At the completion of his schooling Gordon joined the CB’s which was a Navy Construction Battalion unit and also served in the United States Army.
After the war Gordon went to work at the mines in northern Idaho where he met his dear wife, Elva Mae Nearing.  They were married in Coeur d’Alene, Idaho on February 23, 1949.  Their marriage was later solemnized in the Los Angeles Temple.  As a new convert to The Church of Jesus Christ of Latter-day Saints in 1961, Gordon was filled with a desire to serve and share his deep testimony of his Savior, Jesus Christ.  His life changed dramatically and he worked each day to become like Him.
Gordon and Elva are the parents of two children, a daughter, Karen Hammond and a son William (Bill) Gordon Meredith who were always loved with that gift of unconditional love.  Bill passed away from complications of a brain tumor in1990.
The family lived in Coeur d’Alene, Idaho; Orange, California; and Rexburg, Idaho where Gordon and Elva owned and operated Sunbeam Day Care for many years and where many children knew him as “grandpa”.
Because of health reasons Gordon and Elva moved to American Falls, in May of 2010, to be by their daughter and other family members.  In December of 2011 they moved to Spring Creek Assisted Living Center.
Gordon was preceded in death by his son Bill; parents; brother, Ron; and Sister Marie.  He is survived by his brothers Raymond and Howard; daughter Karen (Dan) Hammond, daughter-in-law Teresa (Drex) Palmer, 11 grandchildren and 47 great grandchildren.
Funeral Services, under the direction of Davis-Rose Mortuary, will be June 18, 2012 in the American Falls Stake Center, 111 Church Place, American Falls, ID.  There will be a viewing from 10:45 – 11:45 prior to the 12:00 service.  Burial will be in the Falls View Cemetery located in American Falls, ID.  The family expresses deep appreciation for all the kindness, love, and service from so many.
Our dear, husband, father, and grandfather never met a stranger and had a ready smile and helping hand for everyone.  He had a great ability to anticipate what you needed and was always be there to satisfy that need.  He had a kind, loving, strong heart and is truly an angel of a man who is loved by many.
Condolences and memories may be shared at www.davisrosemortuary.com.

To order memorial trees or send flowers to the family in memory of Gordon Glen Meredith, please visit our flower store.