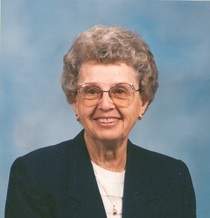 Hannah was born on June 24, 1923 in Dietrich, Idaho, to Ludwig and Augusta Huse.  At a young age, she and her family moved to American Falls, Idaho.  Her father and brother built the family home which is now known as The Arbors in the Fairview area.  Her schooling began at the Fairview School House where multiple ages were taught in the same setting.  She graduated from American Falls High School and attended Albion Normal School.  She then returned to American Falls and worked at the Power County Press until her marriage.

She married Ferdinand â€œFordâ€ Gehring on April 30, 1943.  They had three children, Carol, Myrna and Gary.  Hannah and Ford farmed in Pleasant Valley until their retirement.  In Pleasant Valley, she learned to live without electricity for the first five years of their marriage.  She loved farm life and enjoyed helping in the fields, growing a big garden and raising their family.

Hannah loved to bake.  She would look at the store bakery displays and then go home and bake her own desserts.  Many times after school the kitchen table was full of donuts, cinnamon rolls, sticky buns, cookies and other goodies that she had baked.  She also kept the Gehring family tradition of making chicken and strudle dinner, which was her familyâ€™s favorite meal.  She also enjoyed traveling and one of her highlights was going to Germany where she met some of her fatherâ€™s relatives.  She also enjoyed crocheting afghans and spending time with her family and friends.

During their retirement years they enjoyed spending winters in Sun City West, Arizona, where Hannah enjoyed golfing, participating in crafts and activities and making new friends.

Hannah had always wanted to try her hand at oil painting and when in her 60â€™s, she decided to give it a try.  Her many beautiful pictures are treasured by her family, especially the portraits of Ford, her children and grandchildren.

Hannah was one of the charter members of Shepherd of the Falls Lutheran Church in American Falls.

She moved into Edgewood Spring Creek three years ago.  She enjoyed the companionship of her friends and the many activities that kept her so busy.

Hannahâ€™s family wishes to extend their thanks and appreciation to Pastor Susan and Rich Westland and to Pastor Jamie and Colleen Mayer for all of the loving visits and prayers, especially during this last month.  We also extend our thanks to Dr. Williams and his staff for the excellent care for many years, to Joyce Foster Marlar and the staff at Spring Creek for the loving care and fun times they provided for mom, to Quinn Meadows Rehab and staff and to Heritage Hospice and staff for their loving care, and to her many friends who called and visited while she was in Quinn Meadows.

In lieu of flowers, memorials may be made to Shepherd of the Falls Lutheran Church, American Falls Community Church, or to a favorite charity.

To order memorial trees or send flowers to the family in memory of Hannah H. Gehring, please visit our flower store.