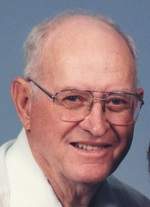 AMERICAN FALLS - Harold William Annen, passed away on January 18, 2013, at the Veteran’s Home in Pocatello, Idaho.

Harold was born to Florence and Anton Annen on June 12, 1925, in Hemingford, NB.

Harold attended a country school through the 8th grade which he got to by a horse and buggy, and as he got older he rode to school on horseback.  Harold graduated from Assumption Academy in 1942 where he was later drafted into the Navy in 1944.  He served as radio man, Third Class, until 1946.

Harold married Joan Bernadine Hollinrake on November 29, 1947 and moved to Idaho to raise five wonderful children together.  After several years as a milkman that delivered milk to rural customers, Harold left for Seattle, Washington where he secured a job with Boing Aeronautics, and was trained as a missile inspector.  Boing then transferred Harold and his family Santa Maria, California for several years and then was transferred back to Washington.  Upon the advice of his heart doctor to seek a low level stress job, Harold moved to Idaho in 1967 to farm with his brother, Clarence.  Several years after farming with Clarence, Harold went out on his own, and continued to farm until his retirement.  Harold and Joan become “snowbirds” and traveled to Arizona in the winters, and spent their summers in Idaho surrounded by their family.

Harold was an avid card player, and made life long friends around the card table.  Harold enjoyed camping, hunting, getting wood and Sunday family gatherings.  Harold and Joan spent many years square dancing with friends and family with the Funstars Square Dance Club in Pocatello, Idaho.

The family would like to give special thanks to the Veteran’s Home in Pocatello, Idaho, for the years of wonderful care they provided to their father.

Donations and memorial gifts can be made to the National Parkinson Foundation Inc., Office of Development, 1501 NW Ninth Avenue/Bob Hope Road, Miami, Florida   33136-1496, or on their web site,  https://www.parkinson.org/SSLPage.aspx?pid=281.

To order memorial trees or send flowers to the family in memory of Harold William Annen, please visit our flower store.