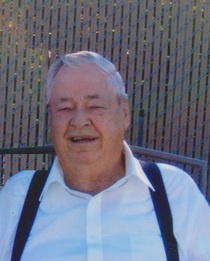 Harry Lester Howell, Jr. 87, of American Falls, Idaho peacefully passed away Saturday morning, April 2, 2016 in his home with his sweetheart by his side after struggling with health problems. Heaven received a special servant and he will be missed.

Harry is the son of Harry Howell, Sr. and Eunice Broadhead born on July 16, 1928.  Harry married his high school sweetheart, Jessie Bales, on November 26, 1945.  They just celebrated their 70th wedding anniversary last November.
Harry and Jessie made their home in Aberdeen and raised oldest son, Leslie there.  Harry started his own business, Howell Plumbing and Heating service serving the people of Aberdeen and surrounding areas.  Harry was a volunteer fireman and ambulance crew member.  In 1969 they moved to American Falls, Idaho where they raised 3 younger sons, Craig, Chris and Bryon. Harry was an active member of The Church of Jesus Christ of Latter Day Saints and later served an LDS mission to Houston, Texas. He enjoyed spending most winter in the warmth of Quartzsite, Arizona and summers with family activities in American Falls,
Harry lived a full and happy life, He will be remembered for his hard work ethic and the constant need to be a prankster, Harry is survived by his wife Jessie and 4 sons, Leslie (Janie) of American Falls, Craig of Deseret Springs, CA, Chris (Kit) Boise, Bryon (Marcy) Blackfoot, 14 grandchildren, 30 great-grandchildren, 3 great-great grandchildren and 2 on the way, sister Joy Gray of Idaho Falls.
Predeceased by his parents and his brother Verl.

A celebration and remembrance of Harryâ€™s life will be held on Tuesday, April 5, 2016 at the American Falls LDS church located on Pocatello Ave. The services will begin at 11:00 am.  A viewing will be held on Monday evening, April 4th, from 6:00-8:00 p.m. at The Davis-Rose Mortuary and at the church prior to the service from 9:45 to 10:45a.m.  Interment will be held in the Aberdeen Cemetery.  Condolences memories and pictures may be shared at www.davisrosemortuary.com.

To order memorial trees or send flowers to the family in memory of Harry Lester Howell, please visit our flower store.