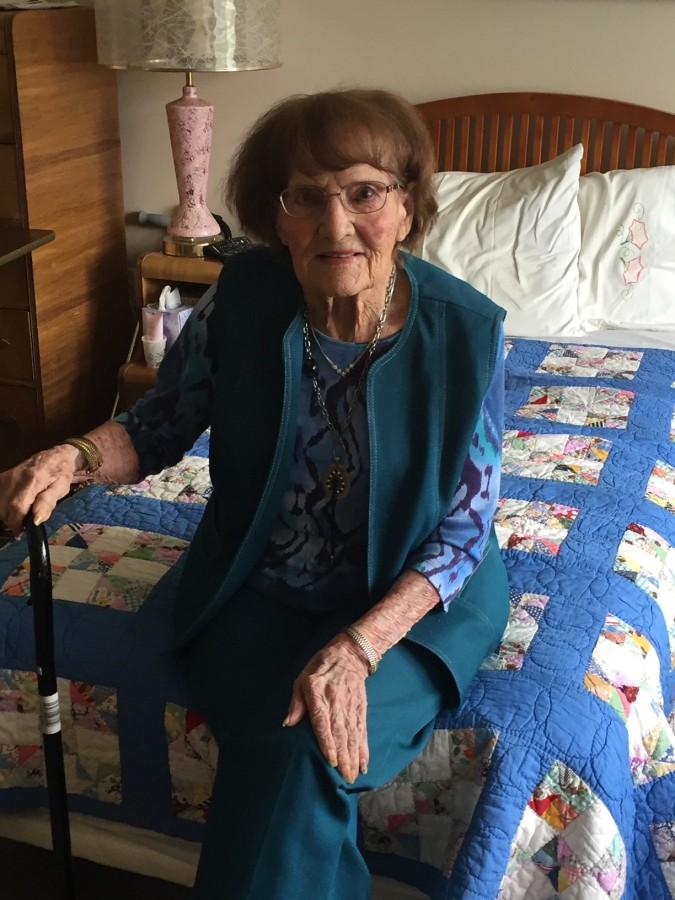 Hazel Alice (Christensen) Westfall of Aberdeen passed away on February 29, 2020 at the age of 104 at the Edgewood Spring Creek Manor in American falls from maladies of old age.  Hazel was born on 29 January 1916 in Salem UT, to Henry Parley Christensen and Ethel Alzina (Snow) Christensen. Shortly after her birth the family moved to Aberdeen, ID to farm.  She resided in Aberdeen the rest of her life.

Hazel attended school in Aberdeen but dropped out to work on the family farm as she was entering high school.  She did not enjoy farm work as a teenager, especially milking cows and always smelling like cow manure.  She met her future husband on the street corner where the First Security Bank was located in Aberdeen.  He had a nice car and offered to take her for a ride; that was the starting of an eternal relationship.  She married Raymond Leslie Westfall on 4 November 1933, in Pocatello, Idaho and was sealed to Raymond in the Idaho Falls Temple of the Church of Jesus Christ of Latter-Day Saints, when she was 80 years old.  Raymond preceded her in death on 26 August 1980.

Hazel was a hard worker, working side by side with her husband, Raymond, on the farm.  Raymond said she was the only one that could operate the hay chopper correctly.  Every spring she cut potatoes.  She was one of the fastest potato cutters.  She also worked on the potato harvester in the fall until they retired in the late 1970s.  After retirement they purchased a home in Yuma, AZ where they lived in the winters, always returning to Aberdeen for the summer.  After Raymond’s passing, Hazel continued to return to Yuma each winter.  In 1983 she met Edward (Ed) Harrison at a VFW dance in Yuma.  Both of them loved to dance and they started dating and were married on 30 March 1983 in Yuma, AZ.  Ed took an instant liking to Hazel’s family in Aberdeen and enjoyed spending the summers up in Aberdeen until he passed away on 4 April 2011 in Blackfoot, ID.  Hazel continued to go to Yuma in the winter until she was in her mid-90s.  After Ed died she continued to drive herself back and forth from Aberdeen to Yuma until her boys finally convinced her to let them drive her on this three day journey.

She has one living sister, Doris Nelson, formally of Aberdeen, now of Pocatello.  She is preceded in death by her parents, two husbands, Raymond Westfall and Edward Harrison, a son, Ray Westfall, and eight brothers and sisters: Donna Petty, Pearl McKnight, Dellavee Nelson and her brothers, Darald, Delbert, Vaughn, Max and Lloyd.

Funeral services will be held on Saturday, March 7, 2020 at 1:00 PM at the Church of Jesus Christ of Latter-Day-Saints chapel in Aberdeen.  The family will meet friends who want to pay their final respects to Hazel from 12:00 to 12:45, immediately preceding the funeral service.

Interment will be at the Aberdeen Cemetery immediately following the funeral services.  She will be buried beside her eternal companion, Raymond Westfall.

To order memorial trees or send flowers to the family in memory of Hazel Alice Westfall, please visit our flower store.