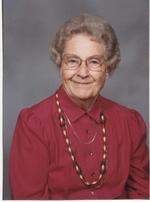 American Falls--Helen Brucks Dalke, 96, passed away June 29, 2011. She was born December 25, 1914, on her parents’ farm at Pleasant Valley near American Falls, ID, to Henry and Louise Brucks. On June 15, 1934, she married Ferdinand Dalke of Aberdeen, Idaho. They were married for almost 74 years before Ferd’s passing in 2008. As long-time residents of Aberdeen, Ferd and Helen were once honored as Grand Marshalls of the Aberdeen Daze Parade.

Helen had many talents. Ceramics was one specialty. She and her husband were members of the Eastern Idaho Ceramics Association. Helen made hundreds of beautiful items and won many awards at the Eastern Idaho State Fairs. She also was a certified ceramics instructor and taught this craft for over 30 years. Helen also taught sewing and cooking to 4-H students. In addition, she was very gifted at quilting, oil painting and gardening. She was a member of the women’s group of the Boots and Saddle Club, Bethany Circle and the Agenda Club. Helen was considered by her children to be a great cook. Three of her specialties included Ukrainian vereniki, German peppernuts (pfeffernusse) and zwieback.

Helen was a long-standing member of the First Mennonite Church of Aberdeen.

In lieu of flowers remembrances may be made in Helen’s name to First Mennonite Palisades Camp, PO Box 246, Aberdeen ID 83210 or Access Hospice, 240 West Burnside St. Suite A, Pocatello, ID 83202. Condolences may be sent to the family online at www.davisrosemortuary.com.

The funeral service will be at 10:30 a.m. Tuesday, July 5 at the First Mennonite Church, 381 W. Washington, Aberdeen, Idaho. The viewing will start at 9:30 a.m. prior to the service at the church. Interment will be at the Homestead Cemetery. The noon meal will be served at the church.

To order memorial trees or send flowers to the family in memory of Helen Dalke, please visit our flower store.