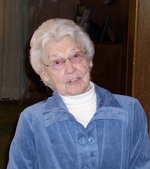 Hilda died peacefully at the age of 100 on September 23, 2012 at her daughter Barbara’s home in Boise.

Hilda was born in Montrose, Nebraska January 14, 1912, the 9th child of Jacob and Anna Wasserburger.  She grew up on a ranch near Montrose with 3 brothers and 8 sisters.  Hilda attended a one room school house near her home through the 8th grade. She then boarded with a family in Harrison, Nebraska in order to attend Sioux County High School where she graduated as valedictorian. After graduating from high school she returned to the same one room school and taught for 2 years.  Her brother George and her sister Alma were among her students.

Hilda attended Wayne State Teacher’s College, graduating, as valedictorian, with a BA degree in Education. She taught in Ardmore, SD, where she met her future husband, Hank Barrett.

In 1938, she traveled to Pocatello, Idaho to marry Hank.  Hilda and Hank resided in Aberdeen and raised their family of 9 children.

Beginning in 1938 Hilda taught Catholic religious education classes throughout her married life depending on the growth of the family and family needs. Overall, she dedicated approximately 40 years to this calling.  Her faith was an integral part of her life, which she practiced daily.  She was Idaho Catholic Mother of the Year in 1951.

Hilda taught in the Aberdeen School District for 20 years, retiring in 1977.  Most of those years were spent in the junior high teaching English, Reading, and German.

After retiring, Hilda continued to teach reading and English to anyone who wanted help.  These students included visiting scientists at the University of Idaho Research Station in Aberdeen and other adults. She also tutored children who were just learning English until she was 90 years old. She loved to play Scrabble and used the game as a method to teach spelling and English to those she tutored.  Hilda was a true teacher at heart.

Thank you to the many previous students who continued to send cards, well wishes or stopped by to visit Hilda after retirement She appreciated hearing how her positive influence had impacted the course of their lives.

During their years of marriage, Hank and Hilda often gave aid and assistance to neighbors in many ways.  Their yard was a gathering place for all the neighborhood children.  Her door was always open, and there was a place at her table, where her kitchen and garden provided countless delicious meals.  As far back as her children can remember, Hilda was feeding the hobos and preparing food and gift baskets for those less fortunate.

She was preceded in death by husband Hank, daughter Janine, grandson Brandon, son-in-law Rick Sanchez, her parents, 3 brothers and 7 sisters.

A Viewing will be from 5-7p.m., Friday September 28, with a Rosary starting at 7:00 p.m. at Blessed Sacrament Chapel, Aberdeen, Idaho.  The Funeral Mass will be at 10:00 a.m. Saturday, September 29, at the church.  Condolences and memories can be shared at www.davisrosemortuary.com.

In lieu of flowers donations can be made to the Idaho Food Bank Children’s Backpack Program.

To order memorial trees or send flowers to the family in memory of Hilda J. Barrett, please visit our flower store.
Send a Sympathy Card