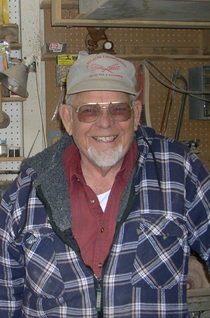 Homer and his twin brother Norman were born January 12, 1929, to Albert & Helen Pankratz in Goessel, Kansas.
He met Justina (Josie) Ediger as a patient in the hospital where she worked as an RN. Their wedding on Dec. 14, 1951 was the beginning of 52 years together. Two children were born in Kansas â€“ Terresa and Christine; Douglas and Stuart were born in Idaho.

In 1956, while living in Kansas, Homer answered an ad for farm work in Idaho and moved the family to Aberdeen. In 1960, he found his niche in brick, block and stone construction with Norv Brown Construction.
Later as an independent contractor, his artistic abilities shone in the many stone fireplaces he built. â€œPankratz & Sonsâ€ included Doug, who helped build the business that continues the same high quality work today.
In retirement, Homer switched to wood for his artistic expression â€“ trains, 3-D pictures and intarsia â€“ beautiful work!!
Homer credits Pastor Dale Potter with bringing him to a realization of his need to know Christ as his personal Savior. Thatâ€™s when he really began to grow as a Christian and wanted to know what the Bible said.


Homerâ€™s wife, Josie, has been in Heaven since May 15, 2004, but Dadâ€™s brother, Norman and sister, Janice, both still live in Kansas. Three children, Doug, Stuart and Christine, live in American Falls; Terresa lives in Florida. Nine grandchildren and 5 great-grandchildren are scattered out in Oregon, Washington, Arizona, Idaho, Alaska, Missouri and South Carolina.
The family will greet friends from 10:00 -10:45 AM Saturday, May 20, 017 with the funeral service will following at 11 AM at American Falls Community Church, 745 Bennett in American Falls.  Condolences and memories may be shared at www.davisrosemortuary.com

To order memorial trees or send flowers to the family in memory of Homer L Pankratz, please visit our flower store.
Send a Sympathy Card