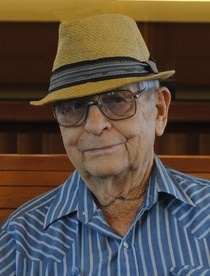 Howard Klempel, a veteran, a farmer/rancher, beloved husband, father, grandfather, great-grandfather and friend passed from this earth to be with his heavenly Father on April 10th, 2014.

Howard was born June 26th, 1925 in Aberdeen, Idaho to Frank and Elsie Klempel.  He graduated from Aberdeen High School then served in the U.S. Army before returning home to farm with his father.  He bought the farm when his father retired then operated it with his wife, brother in-law and children.

Howard was a dedicated, nurturing family man and loyal friend.  He was active in the First Mennonite Church and proud of all the congregation accomplishments.  He was part of the team of men from the First Mennonite Church who enhanced the established Camp Palisades during the mid 1960s with building the Lodge, which will be 50 years old this summer, along with re-grading the road to the camp from the bottom of the valley.  Over the years he helped when he could to continue to improve the Camp.

His passion to reduce soil erosion on his farm plus allow his cattle to have better grazing ground led him to receive the 1965 Bingham County Grassman of the Year.  He continued those conservation principles his entire career until he retired.  After retirement he spent his time in the yard and garden.  Throughout his life he supported the agriculture lifestyle including the activities of his children and grand children.  Whatever he undertook he did it with integrity and a never give up attitude.  While he was very reserved, all of his family and close friends will miss his occasional wit, his smile/wink, his support, encouragement and generosity.

Howard is survived by his wife of 61 years, Joyce Ann (Ruff), of Aberdeen Idaho and his children, Donald (Tina), Russell and Kelly (Debbie);  7 grandchildren: Heather, Katie, Dawn, Justin, Amber, Merissa and Micah; two sisters, Helen Harder and Dorothy Isaak; 7 great grandchildren, a niece, nephews and cousins.  Howard is preceded in death by his parents and his brother Frank Jr.

A  Celebration of Life with military honors will take place on April 22nd, 10:00 a.m. at the First Mennonite Church, 381 West Washington, Aberdeen, Idaho.  Interment will be in the Homestead Cemetery followed by a lunch at the Fellowship Hall.  The visitation will Monday, April 21st from 6 p.m. to 8 p.m. at Davis-Rose Mortuary, 170 Idaho St., American Falls, ID. And also from 9:00 am -10:00 am at the First Mennonite Church.

Condolences may be sent online to www.davisrosemortuary.com for the family.

To order memorial trees or send flowers to the family in memory of Howard Klempel, please visit our flower store.