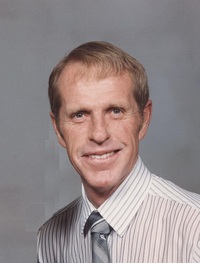 Howard Wiebe’s spirit passed from this earth on Thursday, July 25th at his home in Aberdeen, Idaho.  In doing so, Howard left a long standing legacy of loving friends and relatives. But let’s not forget that he also left memories of lasting smiles and gentle laughs.

For 30 years he wrangled the big rigs for Simplot Potatoes; where he logged over a million miles on the road.  He worked his way up to be the senior driver in the Simplot fleet. He worked long hours and took pride in what he did.  During his career with Simplot he was awarded with The Driver of the Year award.

Yes, he was a truck driver by trade; but his passion was a good conversation and a strong cup of coffee with his friends at the coffee shop. He lived most of his life in a rural area; but he took a keen interest in world events.  His career allowed him to read and listen to world news and a wide range of radio talk shows. He was quite capable of deciphering world events into shreds of common sense truths.

Howard was born in American Falls, Idaho and was the oldest child of Karl and Frieda Wiebe.  His was followed by his sister, Doris, brother, Charlie and sister Carol.  As a young man he was raised on a farm just north of Aberdeen.  He knew his way around irrigation pipe, a Model H tractor and a Holstein; but had the good sense not to become a farmer.

In 1963 he met the love of his life and his future wife, Nancy Smith. They were married on June 27, 1965.  They lived in Denver for one and a half years; the remainder of their married life was spent in Aberdeen surrounded by family and great friends.

To order memorial trees or send flowers to the family in memory of Howard Ray Wiebe, please visit our flower store.
Send a Sympathy Card