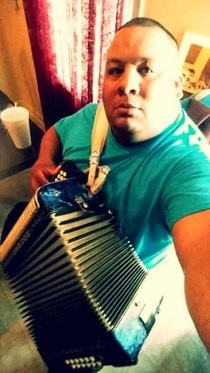 Ignacio Benny Aguirre, 36, passed away peacefully at home on September 3, 2016.  He was called up to heaven.
El Bro was born November 8, 1979 to Paul Sr. and Sylvia Aguirre in Blackfoot, Idaho.  He was raised in American Falls, Idaho.  Later he relocated to Lubbock, Texas in his early 20s.  In the year 2000 he met Estefana Gomez.  On October 19, 2000 they were blessed with Ignacio Benny Aguirre Jr. (Ziggy).  In 2006 he worked at the Cotton Gin.  There he made many friends as a truck driver in the whole West Texas.  In 2011 he met his wife Lilliana Pedraza, from Mission, Texas.  On April 1, 2012 they were blessed with their first baby girl Zenaida Lee Aguirre, aka (Chikkis).  In 2014 Benny and Lilliana decided to part ways.  Apon their separation, Benny decided to move to Laredo, Texas to work in the oil fields where he also met a lot of friends including â€œMike G.â€ and â€œLos 4 Reales.â€ Who later helped Bro, accomplish his biggest dream of becoming a music promoter for Tex Sound Publishing.
On March 1, 2014 Bro lost his Lindo Tesoro (his mother).  Bro decided to stay in Idaho to be closer to his family who he is survived by: Father, Pablo Aguirre, son Ignacio Benny Aguirre Jr., daughter, Zenaida Lee Aguirre, Siblings, Paul Aguirre Jr. (Missy), Mericelda (Cruz) Villegas, Pedro (Shaye) Aguirre, also his nieces, nephews, great niece and great nephew and other extended family who knew him as Uncle Buck.
He is preceded in death by his mother Sylvia, his grandparents, aunts, uncles and other family & friends.

To order memorial trees or send flowers to the family in memory of Ignacio Benny Aguirre, please visit our flower store.
Send a Sympathy Card