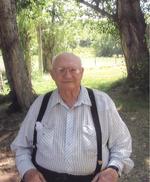 Ivan Vance Haskell, 89, died Thursday, August 9th, 2012 of natural causes at the Pocatello Veterans Home. Born January 20, 1923 in Sublett, Idaho, Ivan was the fifth of nine children born to Raymond and Sarah Haskell. He married Iola Warner in Elko, Nevada on March 28, 1952. Ivan and Iola had two daughters, Debbie Youngstrom (Lyle) of Aberdeen, Idaho and Brenda Gillett (Terry) of Gilbert, Arizona, eight grandchildren and sixteen great grandchildren. Ivan was preceded in passing by his wife Iola (February, 2008), siblings (Lucille Porath, Ada Wangsgard, Alvin and Daniel Haskell) and one great granddaughter. His surviving siblings include Brothers George and Carl and Sisters Erma Moss and Lola May Stokes. Ivan had been a member of the American Falls 4th Ward of The Church of Jesus Christ of Latter Day Saints prior to entering assisted living facilities in Pocatello.

Ivan received his elementary and high school education at schools in the Sublett and Rockland, Idaho areas, followed by one semester at Albion State Normal School. In January, 1943 he was called into the armed service, received training as an Air Force Cadet and received his Flight Officer Commission and a Navigator Rating for the B17 and B29 bombers.

Following his military service he began farming, mostly in the American Falls area, which became his primary means of supporting his family. Although he worked a number of farms his longest employment was at the Vard Meadows farm in the Rockland valley.  He loved being out-of-doors, studying the land and enjoying the wildlife. He also took a period of time in his career to earn a Realtors License and to sell Real Estate. As he completed his farming career he was blessed to be able to spend many hours at his childhood home near Rockland. Being at the “Cully place” brought him great satisfaction as he remembered those wonderful childhood days.

Ivan’s greatest joy came in his family relationships, particularly with his grandchildren and great grandchildren. He received great joy in exploring, hiking, swimming, playing games and teaching them his favorite tricks and jokes.  Many times, as the children would accompany him to the “Cully place” near Rockland, there would be a surprise for them, maybe a new trail with scary inhabitants or a new toy he had constructed. He was very creative and enjoyed using his skills to make things for the children. He also loved to tell anyone who would listen about his experiences as a Navigator on the bombers. He kept models of the planes and would show the children where he sat in the plane and the experiences he had during World War II.

In Ivan’s later years he renewed his interests in sports and trained diligently in swimming and running so he could compete in the Senior Games. He participated several times in the games and received many “gold medals” and other rewards for his efforts. His commitment to training for and participating in the games was an inspiration to those who knew him. His stash of medals will be shared amongst his family as an example and remembrance of this good man.

To order memorial trees or send flowers to the family in memory of Ivan VAnce Haskell, please visit our flower store.
Send a Sympathy Card