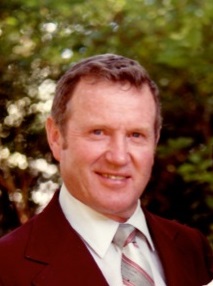 J. Curtis Coman was born November 27, 1929, to Roy B. and Louise Richardson Cowman in American Falls Idaho. He was raised in the Rockland valley, of which he always was so fond. He helped his father with chores from age 4 until he attended ISU. He was the Student Body Class President and Captain of the football team his Senior year in high school. After graduating from Rockland High in 1947, he received his Business Degree from ISU. He met and married the love of his life, Mary Jane Lacy, in August of 1950. They settled in Rockland, where he helped his parents run the Rockland Mercantile. It consisted of the grocery store, meat and a large egg business. It was sold in 1971, and he and his wife moved to American Falls. He was employed by Farm Bureau Insurance and worked as the manager in the American Falls office, which included Power, Bingham, and Bonneville counties for many years. He was awarded many honors, including being the Farm Bureau Insurance Salesman of the year for 3 years. They took many trips during this time, including Hawaii, Brazil, Spain and destinations in the US. They also hosted their family on cruises to Alaska and the Caribbean. He was president of the American Falls Lions Club for two years and zone chairman for Eastern Idaho for 1 year, and program chairman for years. One of the highlights of his life was the time he and Mary Jane spent at their cabin in Island Park. It was purchased in 1978. They hosted many friends and family during the 32 years that they owned it. Curt was an avid hunter and fisherman. He loved hunting season in the fall, and spent many hours hunting pheasants with his friends. He was also able to hunt in Alaska and Africa for big game. He was an excellent sportsman. Curt and Mary Jane attended the Congregational Church in Rockland, followed by the American Falls Community Church. He was very proud of the fact that his grandfather was a pastor at the church Curt attended while he was growing up. He is survived by his daughter, Christine (Tris), and son Greg (Missy), grandchildren Melissa (Mike), Matthew, Garrett, Courtland, William, and 2 great grandchildren Lauren and Anna. He was proceeded in death by his parents, his wife, Mary Jane, and one grandson. In lieu of flowers, please donate to the charity of your choice. Services will be held Saturday March 10th 2018 at the American Falls Community Church, with burial at the Falls View Cemetery. Viewing is at 1pm with the service starting at 2pm. Condolences and memories may be shared at www.davisrosemortuary.com.

To order memorial trees or send flowers to the family in memory of J. Curtis Coman, please visit our flower store.