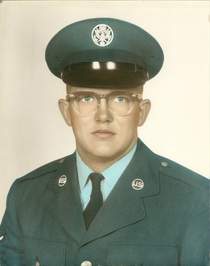 James F. Curl was born May 31, 1944 and died October 6, 2016.  He attended 12 years of school in American Falls.  After 1 year of college he joined the air force.  He was in the air force for 26 years.  He traveled the country and was stationed in Italy, Turkey and Alaska.  He rose to the rank of Master Sargent.  In the 80s he ran the precision measurement equipment lab at Nellis Air Force Base in Las Vegas for 7 years.  His team kept the Thunderbirds in the air and the rest of the base running.  It was a very prestigious position.
After retiring from the Air Force he worked for 10 years at McDonald Douglas Services located in Saudi Arabia.
He retired from MDS and he and his wife Judy settled in Las Vegas.  When Judy died he came to American Falls to be near his mom Sunbeam Heaton.
He wasn't done living and soon reconnected with a dear friend, Rosemary Taylor and decided to keep her.  They were married Dec of 2009 and later, on July 28, 2016 were married in the Rexburg Temple.
He is preceded in death by his wife Judy of 36 years, brother John Curl and parents John Curl and Sunbeam Curl Heaton.
He leaves behind his wife Rosemary and only daughter Katheryn Curl Bentley and 3 grandchildren, Kaitlynn Bentley, Evan Bentley and Kathlyna Bentley.
Graveside services with Military Honors will be at 2:00 P.M. Saturday October 29, 2016 at the Falls View Cemetery, American Falls, Idaho. Condolences and memories may be shared at www.davisrosemortuary.com.

To order memorial trees or send flowers to the family in memory of James Franklin Curl, please visit our flower store.