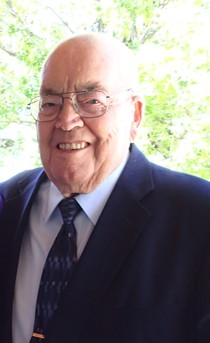 James Mecham Packer of American Falls, Idaho passed away Sunday, November 30th, 2014, at the age of 87, at Harms Memorial Hospital in American Falls, Idaho.
He was born November 25, 1927 in Pocatello, Idaho to Leo Leonidas Packer and Ina Mary Mecham Packer. Jim was the second eldest child of eight, and worked on the family farm until enlisting in the United States Army.
He married Evelyn Perkins on June 29th, 1951 in Pocatello, Idaho and they were Sealed in the Idaho Falls Temple in 1954. He provided for his family by working on the farm, being a Diesel Mechanic, teaching Diesel Mechanics at Idaho State University and later the shop Manager for GK Machinery before retiring in 1993 from Rocky Mountain Machinery out of Salt Lake City, Utah. He was always willing and able to take on any task. In his spare time he enjoyed bowling and working with his hands, but the best times were spent camping and fishing with all of his family. He had a passion for dancing, and after frequenting dances there for many years they purchased the property, renamed it the “Packer's Barn” and continued holding dances. In his later years he enjoyed golfing with his brothers, sons and grandsons. Throughout his life his greatest joys were the times spent surrounded by his family. He was an active member in The Church of Jesus Christ of Latter Day Saints and held many different callings throughout his life.
He was preceeded in death by his parents, his older sister Betty Lee Sibulski and brothers William Packer and Jack Packer. He is survived by his loving wife Evelyn Packer and their 6 children; Jimmy (Diane) Packer of Lebenon, Oregon, Mary Aguirre of American Falls , Betty Oakes of Boise, Sue (Bruce) Wherry of Middleton, Mike (Teresa) Packer and Debby McCarthy of American Falls. He is also survived by his 25 grandchildren, 24 great grandchildren, and siblings; Gene (Gwen) Packer, Eleanor (Don) Beyeler, Michael (Linda) Packer, and Sharon (Dean) Wacaster and sisters-in-law Alean Packer and Mary Packer.
Funeral Services will be held Friday, December 5th, 2014 at 11:00 am at The Church of Jesus Christ of Latter-day Saints at 650 Pocatello Avenue in American Falls, Idaho with a viewing held prior to services from 9:30-10:40 am.  Interment will be in the Falls View Cemetery with military honors by the Roland Evans American Legion Post #3 and the Idaho Honor guard.
Condolences and memories may be shared at www.davisrosemortuary.com.
.

To order memorial trees or send flowers to the family in memory of James Mecham Packer, please visit our flower store.