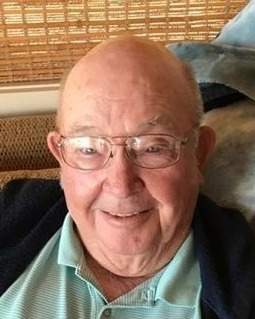 James Raymond Stalnaker of American Falls, father, grandfather, great grandfather, and friend of many. Jim was born in Salinas, California on September 18, 1934, to Edith and Irvin Stalnaker. Jim was raised in San Luis Obispo, California on an apricot farm a few miles from the ocean. Jim married Marguerite (Maggie) MacIver on August 3, 1957, in Bishop, California. Right after getting married, Jim and Maggie headed off to New Jersey for Army basic training. After basic training, they moved to Hawaii with the Army where Jim was a radio operator. After his army service was completed, they returned to San Luis Obispo, where Jim graduated from Cal Poly University in Agronomy.

After his graduation, Jim and Maggie moved to Idaho, where they lived mostly in Arco and American falls. Jim went to work for the Soil Conservation Service (SCS) where he became the district conservationist until he retired at 55. Jim and Maggie enjoyed a very active retirement life of golfing, traveling, fishing, hunting, and living the snowbird life in Parker, Arizona and Cayucos, California. Jim loved the outdoors and was especially fond of hunting and fishing of all kinds. He instilled his love of the outdoors with his entire family.

Jim was proceeded in death by his parents and three brothers, Richard, Dave, and Michael.  Jim and Maggie have three sons, Jim (Theresa), Bob (Lynda) and Scott (Linda). They have seven grandkids, Brandy, Jay, Steven, Matt, Kendrick, Gavin, and Garrett. Two great grandkids, Bruin, and Logan, with another on the way early next year!

A celebration of life will be held at a later date, most likely in the mountains camping.

In lieu of flowers, please consider donations to the Idaho Food Bank or the charity of your choice.

Condolences and/or memories may be shared at www.davisrosemortuary.com .