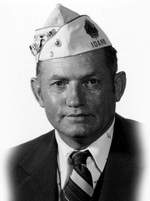 William Jay Phillips 81, passed away peacefully on Sunday December 11, 2011 surrounded by loving family. Jay was born May 28, 1930 to Roscoe and Karna Phillips in Gooding, Idaho. He began his schooling in the Gooding area before the family relocated to American Falls.  Jay attended the old Fairview Elementary School and graduated from American Falls High School in 1949. Shortly after graduating, Jay enlisted in the U.S. Army where he served during the Korean conflict. After returning home from the service in January 1953, Jay met the love of his life, Betty Belville. They were married on July 25, 1953 in Pocatello, Idaho. The couple had 7 children but lost 3 of them to early deaths. They resided in several places in the Springfield/Pingree area early in their marriage. Jay worked various jobs in these early years doing everything from delivering milk and coal to working in a bakery in Blackfoot. As their children got older and ready to begin school, Jay moved the family back to his beloved American Falls where he had always hoped to raise his family. Jay worked at Lamb Weston for a few years before going to work for FMC in Pocatello, where he would work for 25+ years until he retired.

Jay was a member of the American Legion and the VFW. He was actively involved in the American Legion which was very special to him. He was a long-time life member and served in all the local offices up to Commander, then was elected District Commander, and finally State Commander of Idaho in the late 70’s. He was very proud of his country and fellow veterans and always wanted to help in any way he could. He worked with the local law enforcement agencies to start the fingerprinting program at the local grade schools and assisted with getting the Life Flight program up and going in the Pocatello area. Both projects were very dear to him.

When Jay wasn’t volunteering or serving his fellow veterans he loved to fish! His favorite trip was to Seward Alaska where he caught a 180 lb. halibut. He also enjoyed hunting, snowmobiling, riding his motorcycle, and spending time with his children and their families. Jay loved his family and never missed an opportunity to drop in on an unexpecting family member. He looked forward to his family reunions when he could reminisce with his brothers and sisters. Jay never met a stranger and always had a joke to tell you.

Jay is preceded in death by his parents, his brothers LeRoy, Dean, Earl, and Glenn, a baby sister Vera, his daughter Beverly and his infant sons Jay Lynn and David Wayne Phillips.

Funeral services will be at 11:00 a.m. Monday December 19th at the Aberdeen LDS Chapel with Bishop Keith Phillips and Pastor Dean Lifshay officiating. Interment will follow the services at the Aberdeen Cemetery with veteran’s honors by the Aberdeen American Legion Post 59. A reception will follow at the LDS Chapel.  Visitation will be held Sunday December 18th from 5-6:30pm at Davis-Rose Mortuary, American Falls and at 10:00 a.m. before the funeral at the church. Condolences and memories may be shared at www.davisrosemortuary.com.

To order memorial trees or send flowers to the family in memory of Jay Phillips, please visit our flower store.