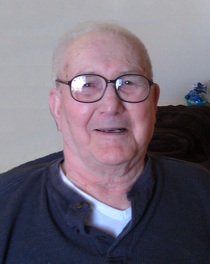 Jesse (Bud) M. Phelps was born May 24, 1920 in Arbon, Idaho to Frank and Rose Phelps and he passed away March 7, 2014 at the Power County Nursing Home in American Falls, Idaho.  Frank and Rose had five children, their only son, Bud, and four daughters, Francis, Thyra, Elaine, and Annabel.  Bud was raised on the family farm and went to school in Arbon.  When Bud was 14 years old, his father, Frank, got caught in the elements and froze to death.  Bud was forced to quit school and devote all of his time to the family farm.  On June 8th, 1944, Bud married Waunita Hutton of American Falls.  This union brought five children, Robert, Buddy L., Brett, Victoria, and Debbie.  Bud turned from farming to driving truck from coast to coast.  During this career turn, the family moved to Omaha, Nebraska where they stayed for 10 years.  The family returned to American Falls in 1961.  Bud continued to drive truck before settling into various jobs in the American Falls area and eventually working for Simplot in Pocatello where he continued until he retired after 20 years of service in 1985.  Bud continued to reside in American Falls after retirement and enjoyed spending time with family, his children and grandchildren.

Bud is survived by three sisters, Francis Lattin of American Falls, Thyra Greaterex of Pocatello, and Elaine (Ed) Kucera of Hamilton MT., three sons, Robert (Kathy) of American Falls, Buddy L. (Barbara) of Fernley, NV, Brett (Janet) of Heyburn, one daughter, Debbie (Kevin) Mauch of American Falls,  and numerous grandkids.  He was preceded in death by both of his parents, Frank and Rose, one sister, Annabel, his wife, Waunita, one daughter, Victoria, and one grandson, Jeremiah Mauch.

The family would like to acknowledge all of Bud’s friends at the nursing home, including Walt Siebel and all of the nursing staff.

Donations can be made to the Pink Ladies at Power County Hospital, 510 Roosevelt, American Falls, ID 83211 in his name.

The memorial service will be at 11:00 a.m., May 24, 2014 at the American Falls Housing Authority, 290 Tyhee Avenue, American Falls, Idaho.  A luncheon and visiting will follow the service.  At 1:00 p.m.  Friends are welcome to follow the family to the Falls View Cemetery to place flowers on the grave.

To order memorial trees or send flowers to the family in memory of Jesse (Bud) M. Phelps, please visit our flower store.
Send a Sympathy Card