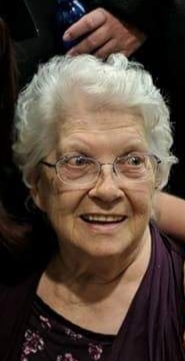 JoAnn Groesbeck Jones, a resident of Aberdeen, Bingham County, ID, died Friday, Dec. 11, 2020 at Power County Hospital nursing home.  JoAnn was born July 7, 1929 in Ogden, Weber County, UT, daughter of Harmon McKenzie and Lilly Agneta Frederickson Groesbeck.  She graduated from Idaho Falls High School in 1947 and attended BYU in Provo, UT, for two years.  The following year, in 1949, she worked at the Snake River Equipment Company in Idaho Falls.  In 1950 she received a call to serve a mission for The Church of Jesus Christ of Latter-day Saints in Western Canada for 18 months.  While there she met her future husband, Winford L. Jones.  On returning home she went back to work at the equipment company until her marriage on Jan. 30, 1953 in Logan, UT.

Her new home in Sterling, ID, was a log home which had been built by Winford, his dad and other relatives and friends.  Through the years, two additions were made on the house to accommodate their growing family.  She resided in the home for 58 years. Her husband died on May 9, 2011. In July of that year she moved into an apartment in Aberdeen.

She loved to sew, knit, crochet, do oil painting and play the piano and organ.  She made most of the clothes for the family from the skin out until the children were into their teens and thought it better to have “boughten” clothes.  She was also the family barber.  She was always eager to learn to do new things and her motto was “you learn to do by doing.”

In 1984 her mother came to live with them.  JoAnn had taken classes in home health care and was a certified care giver, which really helped in caring for her mother.  She had many clients over the next 20 years and loved taking care of them.  Her joke at that time, since she was in her mid 60s, was “The elderly taking care of the elderly.”

The church was very important to her and she had many callings through the years.  Her most cherished one being in the genealogy extraction program.

She was preceded in death by her husband, her parents, three brothers and one sister.  She is survived by her children and their spouses: Stuart (Linda), Lance, Alan (Debbie) and Carol (J.D.) Farrens; her eight grandchildren and her 13 great-grandchildren; one sister, Ruth Hepworth and her best friend Miss Kitty.

A private family viewing will be Wednesday, Dec. 16, at 2 p.m. at The Church of Jesus Christ of Latter-day Saint in Aberdeen.  A graveside services and burial will be at 3 p.m. at the Aberdeen Cemetery.  Memories and condolences may be shared at DavisRoseMortuary.com.

To order memorial trees or send flowers to the family in memory of JoAnn Jones, please visit our flower store.
Send a Sympathy Card