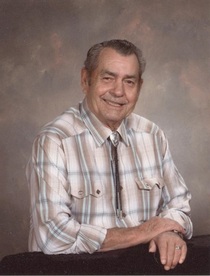 John Dale Brumfield died at his home on March 12, 2014. He was born on May 8, 1938, to John W. and Bertie May Brumfield. He was the youngest of 8 children. He was raised in the American Falls and Aberdeen area. He joined the US Navy in 1955 and was honorably discharged in 1959. He was stationed on Kwajalein in the Marshall Islands. His squadron, VP-1, known as the Atomic Veterans, as they flew out and measured the radiation following the H-Bomb test in 1956. He was 18 years old and having the time of his life, he loved the Navy and was proud to have served.

He worked in the elevator trade for 45 years, he started in Salt Lake City, then Boise, Idaho Falls, Blackfoot, Pocatello and in Montana. Out of necessity, he became a licensed pilot in order to cover more area.

Dale loved life, he was always quick to crack a joke and make people smile. He enjoyed playing his guitar with his brother George and his family. He always proudly displayed our flag.

Funeral services will be held at St. Johns Lutheran Church in American Falls at 11 am on Saturday, March 15, with a viewing from 10 am to 11 am. A private family burial will follow the service. The ladies of the Lutheran Church will provide a meal after the service.

In lieu of flowers, John wished any donations be made to the power County Seniors Center, 180 Idaho Street, American Falls, Idaho, 83211. Condolences and Memories may be shared at davisrosemortuary.com .

To order memorial trees or send flowers to the family in memory of John Dale Brumfield, please visit our flower store.