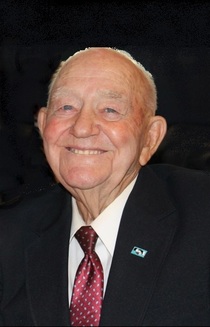 Bob Buzzard went home to be with the Lord, his loving wife and son on January 3, 2016.  Bob was born March 8, 1928 in Barton County Missouri.  Bob was the son of Sylvester A. and Sarah A. Ragsdale Buzzard. Bob met the love of his life, Dorothy May Walker Buzzard in April of 1948.  They dated for 7 months and then were married on October 3, 1948. Their marriage was blessed with 5 children: John Buzzard Jr. (Pat), Sherry Lynn Beebe (Conley), Randy Glenn Buzzard (deceased) (Lanna), Judy May Wallace (Greg), and Patty Sue Barker (Russell).  He was blessed with 12 grandchildren, 28 great-grandchildren, many nieces and nephews, one great-great grandchild; Cooper Conley (preceded in death) and one great-great granddaughter expected in May. Bob and Dorothy were married for over 64 years when Dorothy passed away on May 12, 2013.

Bob was the second of three boys, oldest was Jim (James). His little brother William Joseph, died at only 3 months old. In June of 1939 Bob, his mother and his brother Jim moved to eastern Oregon. Sometime later they moved to American Falls when his mother married Christ Funk.  Bob had 2 half-sisters, Ardith and Verda Funk.

Bob went to 6th, 7th and 8th grades at Sunny Valley School, which was about 2 1/2 miles from their home.  The school board bought an old horse for Bob to ride to and from school each day. There was a small barn at the school for the horse with hay and water. He was the only person to graduate the 8th grade and he did not get to go to high school, as he was needed on the farm. When he turned â€œ18â€ he enlisted in the Navy and served in San Diego, Pearl Harbor and San Francisco.

Bob worked for FMC for 37 years when he retired in July of 1987.  Bob and Dorothy enjoyed spending their winters in Arizona for many years. Bob was easy to spot on the golf course everyday around noon with his friends. He was proud of the 3 â€˜hole-in-onesâ€™ he got over his time golfing. He was also an avid sports fan. He loved having coffee at Rockland Pharmacy with all his friends as well. He was an avid hunter and woodworker. Above all, Bob was a family man.  He enjoyed spending time with all of his family.

The visitation will be on Friday, January 8th, from 5:30-7:00 p.m. at Davis-Rose Mortuary, 170 Idaho Street in American Falls. Services will be held on Saturday, January 9th at Powerhouse Christian Fellowship, 2905 Sunbeam Road, American Falls, with a viewing at 10 a.m. and service at 11 a.m. Interment will follow at Falls View Cemetery, followed by a reception at Powerhouse Christian Fellowship. Condolences and memories may be shared at www.davisrosemortuary.com.