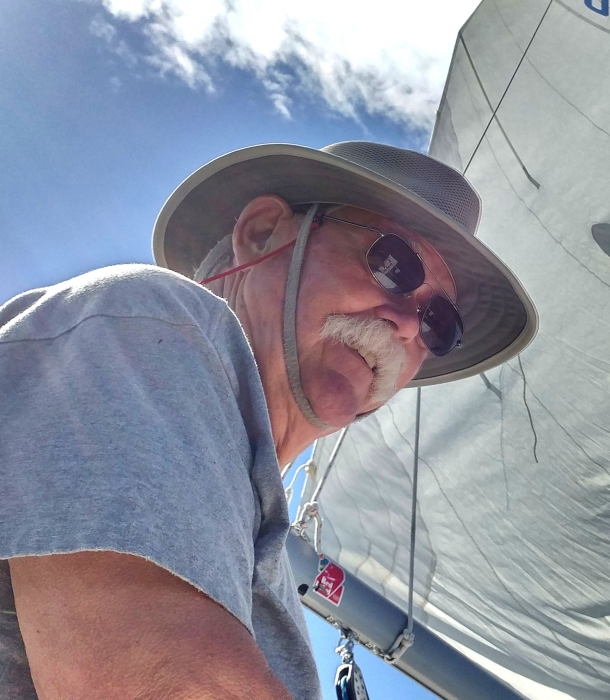 John Willard Ellesson was born to his proud and loving parents, Willard and Lorraine Ellesson, on January 25, 1948 in Ogden, Utah. His sister Linda was also born in Ogden and Barbara was later born in Pocatello.   His parents moved to Pocatello when John was two years old and John remained an “Idaho boy” throughout his life.

Soon after the move to Pocatello, Willard built the family home on Mink Creek Road where John enjoyed the adventures of a country boy and participated regularly in boyhood shenanigans, many of which were unbeknownst to his sisters and parents.  John helped raise a variety of livestock with his family and rode horses in the hills near the house.  It must be said, that he was not overly fond of the pigs who regularly escaped the confines of the pen.

As a youngster, he participated in Little League baseball and enjoyed his time as a football player for Pocatello High School. He enjoyed playing golf with his family on both the Riverside and Highland courses.  For his entire life John was an avid fan of baseball and football-- a love that he shared with his nephews Peter and Erik Anderson.  He often attended the high school games in which Peter and Erik played.  His special love for the Ohio State Buckeyes is legendary among both family and friends as was his loyal support of the San Francisco Giants and the San Francisco Forty-Niners.  John proudly wore the Chicago Cubs championship baseball cap during the last months of his life.

John’s grandfather, Peter Ellesson, and his father were lumbermen through and through.   John worked at Chubbuck Lumber for years mentored by the expertise of his father.  The learning and experience he gained during those years helped him successfully own and operate Dam Lumber in American Falls, Idaho for many years prior to his death.   He valued his co-workers and his customers and formed lasting relationships with many of them.  John married Crete Brown on June 27, 1990 and they made their home on a property that overlooked the American Falls Reservoir.  He loved living in this home where he could be near the water, and have his beloved dogs and cats with him.  Although they were later divorced, Crete and John remained friends throughout his life.

With the tutelage of his close friend, Rod Egli, he learned to sail a boat and shared that experience with so many of his friends.  He loved those escapades and his time with Rod who was like a brother to John.  He would often call his sisters and regale them with details of these boating adventures.

John enjoyed traveling with his friends to Mexico and Sint Maarten as well as the yearly pilgrimage to his time-share in Depot Bay, Oregon.  Luckily, he was able to travel to Depot Bay this year for one last visit before becoming too ill to travel.  John loved collecting jewelry, firearms, and artwork.  His home is filled with beautiful artifacts from his travels.

John was a staunch supporter of the American Falls community, its citizens and the small businesses that make the town a great place to live.  In recent years, John proudly served the community as a member of the Power County Hospital District Board of Directors and as a member of the Power County Waterways Board.  John’s loyalty to his close friends and family was unparalleled. He cared deeply for his girlfriend of 6 years, Kris Camerud, who was a constant support for him as he struggled with his disease and with whom he shared fun times.

John re-connected with his nephews Mike and John Leeds in the past few years. The three men shared a love of the outdoors and often spoke of hunting and other wilderness explorations.   He particularly cherished his time with Mike’s son Caleb who adored his great-uncle. In recent years he traveled to Boise to share Thanksgiving and Christmas with Barbara’s family. Sadly, John never met John and Niki’s son Kash born July 1, 2020 due to concerns about traveling during the Covid pandemic.

Barbara and John traveled to his grandparent’s farm in northern Minnesota, in July, 2016 and connected with his first cousins that had not seen John in many years. It was a trip filled with meaningful remembrances and childhood stories.

John lost his battle with end stage renal disease on January 12, 2021 surrounded by his close friends and his sister Barbara.  The family thanks the nursing staff at Portneuf Medical Center for their professional and compassionate care during his recent hospitalization and thanks the caregivers from Heritage Hospice for the support of John and his friends/family at the end of his life.  Thanks to Davis-Rose Mortuary in American Falls for their support and sympathies.

John is survived by his sister, Linda (Pete) Anderson; nephews Peter John Anderson (Allison, Mia, Paisley); Erik Anderson (Tori, Benjamin); his sister Barbara (Greg) Leeds; nephews Mike (Caleb) Leeds; John (Niki, Kash) Leeds; Charlotte (Ron) Burke; Clyde Hedin; Jean (Vance) Norgaard; Terri (Mike) Busch.  He was preceded in death by his parents and grandparents Peter and Marie Ellesson, John and Agnes Hedin and his uncles Milton Hedin and John Hedin.  John had many close friends for which he was thankful and for which the family is grateful.  In lieu of flowers one may donate to the charity of one’s choice.

Family and friends will celebrate John’s life at a later date.  Godspeed, John.  Condolences and memories may be shared at www.davisrosemortuary.com.

To order memorial trees or send flowers to the family in memory of John Willard Ellesson, please visit our flower store.