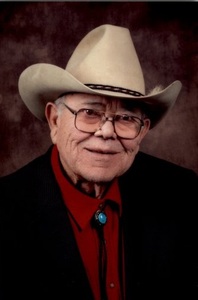 John R. Hayes Born Aug. 2, 1937 in American Falls, Idaho to Wallace and Anita (Bade) Hayes. He passed at Pocatello, Idaho on August 11, 2013 of natural causes after an exciting game of Bingo at the Shriner’s picnic, and watching the morning slack at the American Falls rodeo.

John was born and raised in Rockland on a cattle and dry land wheat farm. He graduated from Rockland High School where he was active in FFA and athletics. While in high school he was a stand out athlete and a member of the speech club. After graduation from high school he attended Utah State University and was also active in the Idaho Cowboys and PRCA rodeo associations as a bulldogger.  In 1961 he married Kathleen Goicoechea of Gooding. They built their life south of Rockland on the family farm where they raised many crops but their best was their three daughters: Tani, Tami, and Heather. John was active with the farming; raising and showing Hereford cattle; bull sales; racing Quarter horses; activities with the girls - 4-H, high school rodeo and basketball; and in the fall when the harvest was done it was hunting season. Over the years, John was very active in several organizations the Masonic Lodge; the Shriners; the Order of the Eastern Star; DeMolay; Idaho Hereford Breeder’s Association; American Hereford Association; National Cattleman’s Association; the Power County Fat Stock Sale and 4-H advisory board; Power County Grain Growers; Idaho Purebred Breeders; Idaho Cattleman’s Association, and served as an advisor to the Idaho 4th District and State High School Rodeo Associations. John and Kathleen later divorced and John retired to Pocatello where he sold real estate and spent the last 23 years with his longtime significant other Karen Skinner. John and Karen spent their time enjoying each other, traveling, meeting new people, and visiting family and friends. They even lived a few years down in the Louisiana bayou. John and Karen both enjoyed traveling, fishing, playing cards, collecting and spent most of their later years following their grandchildrens' many activities. John got the greatest enjoyment from his grandkids, and he was always there to tell them a story and give them advice.

He is preceded in death by his daughter Tani Hayes, Brigette Adams (Karen’s daughter), his sister Marie Hayes Reinstra, his parents Wallace and Anita Hayes, Grandparents and numerous aunts, uncles, and cousins. The funeral service will be held at 11 am Fri., August 16, 2013 at St. John’s Lutheran Church in American Falls.  The visitation will be from 6-8 pm Thurs. Aug. 15th at the church and Fri. at 10 am prior to the service.  Interment will be in Falls View Cemetery in American Falls. Condolences and memories may be shared at www.davisrosemortuary.com.
Memorials can be made to the Shriner’s Children’s Hospital in Salt Lake or Idaho Friends of 4-H.

To order memorial trees or send flowers to the family in memory of John Ralph Hayes, please visit our flower store.
Send a Sympathy Card