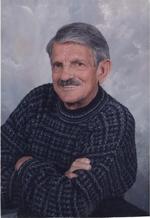 John Kildew passed from this life, at home on December 12, 2011, following a long battle with lung disease. John was born January 29, 1927 in American Falls, Idaho, the son of John and Alice Barnard Kildew. He grew up in Rockland and graduated from Rockland High School in 1944. John’s father died of pneumonia in January when he was eight years old, after trying to rescue a friend who drowned in the icy waters of a water wheel on Christmas Eve. Shortly after, he went to live with his Aunt and Uncle, Bob & Vera Robinson.

After graduating from High School in 1944 he enlisted in the U. S. Navy. He went through basic training at Farragut, Idaho and was then shipped to the island of Guam where he served as a Radioman until the end of WWII. After his discharge in 1946 he enrolled in college at the University of Idaho, Southern Branch, (ISU) in Pocatello, Idaho. When his Uncle became ill he had to return to Rockland and help on the farm. He worked at various jobs, including hauling potatoes in the fall during “Spud Season”. It was during this time that he met his future wife, Jackie. They married in 1951 and made their home in Rockland most of the time.

In 1959 he purchased a farm at the end of a “Dead End” road just a mile from where Jackie had grown up. They eventually bought 80 sagebrush covered acres from the State of Idaho to complete their farm. John, Jackie and their two sons, John A. and Kim worked diligently to clear the land. It provided more feed for their herd of cattle. In 1960 John accepted employment at Power County Grain Growers, starting out as a Mill hand and finishing in 1987 as a Grain Buyer. His years of labor on the farm and working in the grain dust weakened his lungs causing the disease which eventually ended his life.

In John’s younger years he liked to rodeo, competing in Bareback Bronc Riding. In later years he took up skiing, both water and snow, and more recently golf. He could never have been classified as an expert in any of these endeavors, but really had a lot of hours of fun with his friends trying. On the ski hill he never crashed and burned, but always seemed to somehow land on his feet. He had an astonishing mathematical brain, and could remember what cards had been played in any game of cards. He followed all of the High School, College, and professional teams in football, basketball, and could even be found watching baseball if that was the only game in season. Keeping up with sports, provided most of his entertainment in recent months when his lung disease incapacitated him.

He is survived by his wife Jackie, and two sons, John A and wife Natalie of Paradise, UT., and Kim R. of Boise, ID, 2 grandsons and 3 granddaughters, 1 sister, Lenore Hartley, Pocatello, ID. Preceded in death by parents, 1 brother, Gene, grandparents, Rollo and Sadie Kildew and Thomas and Millie Barnard.

The funeral service will be at 11:00 a.m. Friday, December 16, 2011at The Church of Jesus Christ of Latter-day Saints, American Falls 3rd Ward, 656 Pocatello Avenue, with Bishop Steve Tolman conducting.

The visitation will be 6:00 to 7:30 pm, Thursday at Davis-Rose Mortuary, 170 Idaho Street, American Falls, and Friday, from 10:00 to 10:45 a.m. before the funeral at the church.  Condolences and memories may be shared at www.davisrosemortuary.com.

To order memorial trees or send flowers to the family in memory of John Kildew, please visit our flower store.
Send a Sympathy Card