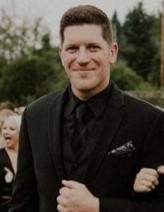 John Michael Medema, age 35, was called home on October 1, 2021, at his residence in Pocatello, Idaho.  John was born in Norfolk, Virginia on July 13, 1986, to Michelle Prudhomme and Michael Medema.  At the time of his passing, John was employed by Lamb Weston and during his limited time, John made numerous friends and touched every heart he came in contact with as he did throughout the entirety of his life.

Anyone that knew John knew half of his heart belonged to Idaho and the other in Illinois. John had countless hobbies and interests including Chicago Bears, Blackhawks, hiking, snowboarding, fishing, golfing, and was always the life of the party.

John is survived by his grandparents Maureen and Jack Medema of Schaumburg IL, his father Michael Medema also of Schaumburg IL, his children Bryce and Sadie, sisters Kaley Palomares (Ulises) of American Falls ID and Marria Gabriel of American Falls ID, as well as a great number of aunts, uncles, nieces, nephews and cousins in both Illinois and Idaho. John is proceeded in death by his grandparents Joan and Pete Prudhomme and his mother Michelle Prudhomme Hardy.

We probably missed many people, but the newspaper can’t offer 4 pages to include all those John impacted.

Click to download / open
To order memorial trees or send flowers to the family in memory of John Medema, please visit our flower store.