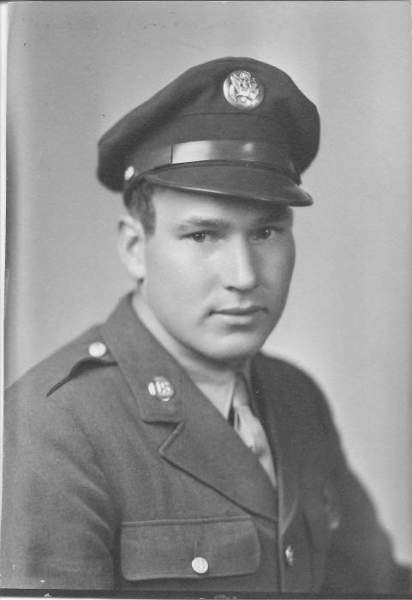 John Russell “Russ” Orders, 93, passed away at Lincoln Court Retirement Community in Idaho Falls, Idaho on January 25, 2018.  Russ was born on the Orders Homestead near American Falls, on April 22, 1924, to Reuben and Rachel Orders.  Russ attended school at Cold Creek and American Falls High School.  Russ enlisted into the United States Army in July, 1943, and after serving in Europe during World War ll, Russ was Honorably Discharged in July 1945, having earned the rank of Private First Class.  Russ returned to American Falls where he met Jeanne Robinson.  Russ and Jeanne were married on June 11, 1949.  Russ and Jeanne were blessed with three children, John, Daniel, and JoLynn.  Russ farmed in the American Falls area for 50 years, and was an active member of the Methodist Church, the Swingeroos Square Dance Club, and was a charter member of the Power County Search and Rescue. Russ was an avid hunter, fisherman, and ATV enthusiast. Russ is survived by his sister, Lora Lee (Joe) Smuin, and sons John (Pat), and Daniel (Chris), and daughter JoLynn (Kevin) Haskell, and his special grandchildren, great grandchildren, and nephews and nieces.  Russ was preceded in death by his wife Jeanne, parents Reuben and Rachel, sisters Wanda and Katherine, and his brothers Elden and Noel.  As per Russ’s wishes, he will be cremated.  A grave side service, with Veterans Honor Guard for Russ, and Jeanne will be held at the American Falls Cemetery in June.  Arrangements are being coordinated by Davis Rose Mortuary in American Falls.  The family would especially like to thank the nurses and staff at Access Home Care and Hospice for their compassionate care of Russ. Memories and condolences may be shared at www.davisrosemortuary.com

To order memorial trees or send flowers to the family in memory of John Russell Orders, please visit our flower store.