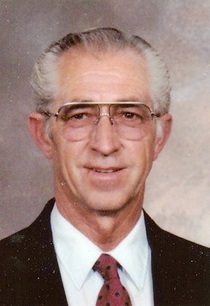 Joseph Howard Kendell, 81, of Aberdeen, Idaho passed away August 3, in his home, after battling a lingering illness.
Howard was born on January 23, 1936 to Ezra and Myrl Petersen Kendell in Cornish, Utah. He graduated from North Cache High School in 1954. After graduating, he moved to Sterling, Idaho to farm with his uncle and cousins - later farming on his own. In November 1958 he married Eileen Holt. He continued to farm as they raised their family of six children in American Falls, Idaho. After a battle with cancer, Eileen died in 1998. He continued to farm and worked for AMS in American Falls until the age of 79. In February 2000 he married Glayda Corbridge of Aberdeen, Idaho, where they remained until his death.
Howard actively served in the LDS church, as well as in the community. He loved baseball and played softball until age 70. He really enjoyed watching high school sports and refereed church, high school, and college basketball for many years. In his later years he was able to hunt and fish more often and visit with lifelong friends. He loved to travel and visited many states and countries. Howard cherished his family, and was truly a friend to everyone he met. He was recognize by his friendly wave and was quick to make everyone smile and laugh. Howard will ever be known for his vast knowledge of farming, integrity, strong work ethic, honor, and great sense of humor.
He was preceded in death by his wife, Eileen Holt Kendell, daughters, Dawn Kendell and Joy (Jansen) Davis; his parents Ezra and Myrl Kendell; his brother, Marvin and sister Karla Rawlings. Howard is survived by his wife Glayda Olsen Kendell of Aberdeen; Brothers - Ross (Nancy) Kendell of South Jordan, Utah; Vern (Priscilla) Kendell of Aurora, Colorado; sister Carolyn (Gary) Barber of West Jordan, Utah; Children - Kathy (Joe) Badger of Willard, Missouri; Jay (Jennifer) Kendell of Cedar Hills, Utah; Meredith (Doug) Dunlow of Nacogdoches, Texas; Amy (Ryan) Olsen, of Melba, Idaho; Konni Kendell of American Falls, Idaho. He has left a legacy of 30 grandchildren, 19 Great-grandchildren, along with Glaydaâ€™s 3 surviving children and their spouses and 13 surviving grandchildren and 20 great-grandchildren.
Visitation will be held from 6-8pm on Thursday, August 10, 2017 at the Davis-Rose Mortuary 170 Idaho Street, American Falls, Idaho, and from 11-11:45 A.M. Friday, August 11, 2017 at The Church of Jesus Christ of Latter-Day Saints building in Aberdeen, Idaho (149 West Central Ave - Aberdeen).  The Funeral services will be at 12 Noon at the Church.  The burial will follow in the Falls View Cemetery in American Falls, Idaho.
Condolences and memories may be shared at www.davisrosemortuary.com.

To order memorial trees or send flowers to the family in memory of Joseph Howard Kendell, please visit our flower store.
Send a Sympathy Card