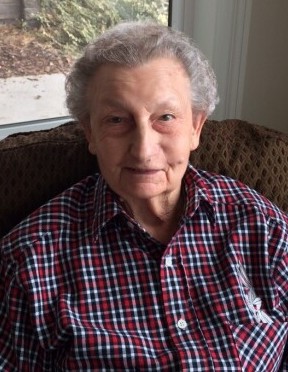 Josephine Irene Vinot passed away peacefully in her sleep on 11/4/2020 at her home in American Falls.  Josephine was born near Rice, Minnesota on January 23, 1923 to Peter and Mary Marsolek and was the eldest of seven children.  In her teens she moved to Gary, Indiana and then Chicago where she worked for Douglas Aircraft Company and then got a transfer to work at the Douglas factory in Santa Monica, California where she worked as a “Rosie the Riveter” for several years during World War II.  One night while dancing at the Aragon ballroom in Ocean Park, California she met her future husband Joseph C Vinot. They married in 1945 and later had two children George(Denise) and DeEtte (Wayne Thomas). After Joseph passed away in 2004 Josephine moved from Santa Monica to American Falls, where she lived with her daughter DeEtte and her husband Wayne.  Josephine is preceded in death by her parents, five siblings, her husband, Joseph Vinot, and son, George Vinot.  She is survived by her daughter, DeEtte Thomas and 3 grandchildren, Aaron, Daniel and Christel Vinot.

There will be a graveside service in Santa Monica, Ca.  Memories and condolences may be shared at DavisRoseMortuary.com

To order memorial trees or send flowers to the family in memory of Josephine Vinot, please visit our flower store.