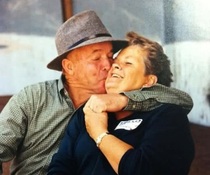 Karen Palmer King left this world to join the love of her life, Veryl Worth King, and her beautiful daughter Amber King Henrie on Sept 5th, 2017. She was born March 22, 1938 to Nellie Darcus and Johnny Layne Palmer in Aberdeen Id. She grew up just up the road from the boy who would steal her heart. They married November 7th, 1953, and were later sealed in the temple for time and all eternity. Together they lived on the family farm where they raised 10 children. Shanon King Burrage, Desirae Pena, Johnny Layne King (Bunny), Dana King Thompson (Lorne), Valerie King Evans, Murrell Palmer King, Martin Jared King (Gwen), Amber King Henrie (Doug), Kandace King Harris, Katrina King Medina(Adam). She was preceded in death by her parents Johnny and Nellie Palmer, Husband Veryl King, Daughter Amber King Henrie, granddaughter Kaina Noel Medina, brothers Ferrell Palmer and Neldon Palmer, and sister Donna Welch. She left behind 9 children, 45 grandchildren, 63 great grandchildren and 2 1/2 great great grandchildren, 2 sisters Denise Dancliff, and Jackie (Bill) Terry, and too many nieces and nephews and extended family and friends to count. She was loved by all who knew her. Services will be held at the Aberdeen LDS 1st ward Saturday Sept 9th at 11am. A viewing will take place at Davis-Rose Mortuary in American Falls, ID. Friday Sept 8th from 7-8:30PM. Another short viewing will be Saturday from 10-10:40AM at the church prior to the funeral.
To order memorial trees or send flowers to the family in memory of Karen King, please visit our flower store.
Send a Sympathy Card