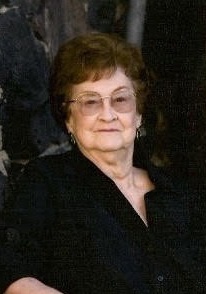 LaRue (Leyshon) Schumacher, 85, passed away on July 17, 2015 in Pocatello, Idaho.
LaRue was born October 23, 1929 at home in Aberdeen, Idaho.  She was the third child of Lorenzo and Jennie Mae (Warner) Leyshon.  She was raised in Aberdeen where she attended school and graduated from Aberdeen High School.  LaRue married Clyce Schumacher on June 10, 1947 in American Falls.  Shortly after they married, they moved to Rockland, Idaho where they were involved in ranching.  During this time, their sons Dennis and Darold were born.  Later, they moved to Aberdeen where they continued farming.  Their third son, Delane, was born completing their family.  After farming, Clyce and LaRue became Mac Tools distributors from 1983-1995.
LaRue was a member of the Church of Jesus Christ of Latter-day Saints. She loved traveling, camping, and fishing with Clyce.  She also loved family events, and most of all, spending time with her grandchildren.
LaRue is survived by her brother Jay (Mary) Leyshon of American Falls, ID, her three sons and daughters-in-law, Dennis (Linda) Schumacher, Darold (Darlene) Schumacher, and Delane (Vicki) Schumacher all of Pocatello; grandchildren, Joe Schumacher (Patricia) of Hillsboro, OR, Cheri (Mike) Sullivan of Pocatello, ID, Nicki (Kevin) Hawley of Norco, CA, Justin (Amy) Schumacher of Riverside, CA, Natalie (Jason) Marenda of Hailey, ID, Wesley (Ashley) Schumacher,  Zachary (Tessica) Schumacher,  Shylo (Travis) Williams, Jasmin Schumacher, all of Pocatello; ten great-grandchildren, Tyler Schumacher of Redmond, OR, Brendan Schumacher of Hillsboro, OR, Kevin Rives of Pocatello, ID, Jake and Josie Marenda of Hailey, ID, Camille and Calise Hawley of Norco, CA, Mason and Avery Schumacher of Riverside, CA, Ava Schumacher of Pocatello, ID; and one great-great granddaughter Maddison Schumacher of Hillsboro, OR.
She was preceded in death by her parents, her husband, Clyce, three sisters; Mildred Curtis, Yuvonne Edmonds, Della Mae Taillet, and one brother, Dareld Leyshon.
The family would like to thank the Encompass Home Health and Hospice team and Gateway Transitional Care Center for the compassionate care they provided.
In lieu of flowers, please donate to a charity of your choice.
A viewing will be held Tuesday, July 21, 2015 from 6-8 p.m. and another viewing will be held Wednesday, July 22, 2015 from 9:30-10:30 a.m., at Davis Rose Mortuary.  The graveside service will follow at 11:00 a.m. at the Falls View Cemetery in American Falls.  Condolences and memories may be shared at www.davisrosemortuary.com.

To order memorial trees or send flowers to the family in memory of LaRue Schumacher, please visit our flower store.