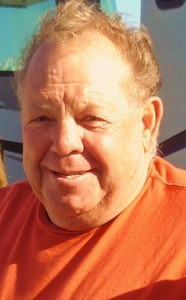 Lawrence L Funk left this world on July 31, 2013 at Portneuf Medical Center.  He had suffered with COPD for several years and it developed into congestive heart failure.  His death was unexpected.

He was born on September 10, 1939 to William E and Ann Lehman Funk Potratz in American Falls, Idaho.  He grew up on the farm and he loved the land.  His favorite farm job was plowing.  He loved the smell of the earth as it was turned over.

He left school and joined the US Navy in 1958.  He had several duties while in the service, including shore patrol, anti submarine air squadron and was stationed in Japan and San Diego. His last duty was on the USS Koiner as a gunner’s mate. During his time in the Navy he grew to love the sea.  He built two pontoon boats.  Boating and fishing which were important parts of his life until the end.

While in the Navy he met and married Sherri Garnsey.  Together they had Kim, Tanya, & Kevin.

He married Rose Ann Deeg, a lifelong friend and companion on November 26, 1965.  They farmed for several years.  It was during that time that he was involved in a farm accident that resulted in the loss of his right leg.  He was fitted for a prosthetic leg and never looked back.  He was proud of the fact that most people were not aware of the prosthesis because he walked without a limp.  He wore several hats during his working life, as farmer, deep soil tillage equipment owner, trucker, and insurance agency co-owner.

Lawrence and Rose retired in 2006 and began traveling.  They sold their home and became “full-timers” in their motor home in 2009.  After retiring Lawrence purchased a Gold Wing motorcycle.  Riding with a group of local men from the community and also a group in Arizona became his 2nd love.

Lawrence will be missed by many.  He was happy, outgoing and fun to be with.  He was a people person.  His favorite saying was “I’ve never met a stranger” which is evident by all who felt they knew him after one meeting.  He loved life and lived it with gusto.

A memorial service will be held at 10AM on August 9th at St John’s Lutheran Church, 656 Tyhee in American Falls.  The family will have a private interment at a later date.  Rose’s contact information is PO Box 361, American Falls, 208-221-9243.   Any memorial donations may be given to the charity of your choice.     Condolences and memories may be shared at www.davisrosemortuary.com.

To order memorial trees or send flowers to the family in memory of Lawrence "Larry" Funk, please visit our flower store.
Send a Sympathy Card