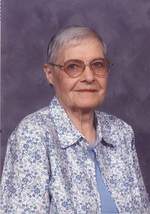 Lenore Lind, 86, passed away Saturday, December 15, 2012 at the Power County Nursing Home, where she had resided for the past 3 months.

Lenore married Darrel O. Lind on February 20, 1948.  They settled in Roy, Idaho where the two farmed and raised two children.

Lenore worked part time at the Power County Hospital in the early years of their marriage.

Lenore was active in the Power County Senior Center, The Order of the Eastern Star, and the Community Church and Sunday School.

Lenore is survived by her son, Rodney (Peggy) Lind of Battle Ground, WA,

A memorial service will be held at 1 p.m., Friday, January 4, 2013 at the American Falls Community Church.

Arrangements are under the direction of Davis-Rose Mortuary in American Falls.  Condolences and memories may be shared at www.davisrosemorturay.com.

To order memorial trees or send flowers to the family in memory of Lenore Lind, please visit our flower store.