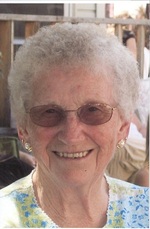 She graduated from Aberdeen High School.  She married Bruce (Duke) Line June 1, 1951 in Springfield, Idaho. Duke passed away in 2002; they were married for 52 years.  They moved to Aberdeen in 1959 where she continued to live until 2010. She then moved to Highland Hills Assisted Living Center where she lived until her death.

She worked for the Simplot Processing Plant until her retirement in 1992. She was a devoted wife mother and homemaker. She enjoyed crocheting, quilting and loved spending time with her family. After retirement her son Terry taught her to play golf. She spent a lot of time on the golf courses in Aberdeen and American Falls with Terry and Rhonda or anyone else she could get out on the links. She loved playing in golf tournaments with her friends in Aberdeen where she won a few trophies. One of her fondest memories was going on a trip to Canada with their good friends Clyce and LaRue Schumacher.

The visitation will be Wednesday, December 21, 2011 from 6-7:30 pm at Davis-Rose Mortuary, 170 Idaho St., American Falls.  The graveside service will be held at 1 pm Thursday, December 22nd at the Springfield-Sterling Cemetery.  Condolences and memories may be shared at www.davisrosemortuary.com.

To order memorial trees or send flowers to the family in memory of Leola Phyllis Line, please visit our flower store.