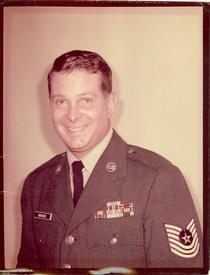 Oct 1952: Somewhere over the South China Sea â€“ Our destination â€œThe Pearl of the Orientâ€ â€œSaigon French Indo Chinaâ€. Our crew of five and cargo of four American high ranking intelligence officers from the 13th Air Force were stationed at Clark AF Base in the Philippines.

Leon E Adamson was born March 4, 1932 to Tom and Merle Adamson. He had one older sister, Margaret and one younger brother, Kevin.
As a young boy, working on the family farm in Springfield, Leon would watch the big, four engine bombers fly over their farm as they were practicing maneuvers. These young WWII men were his heroes.

At the young age of 13 Leonâ€™s Dad died leaving the responsibility of the farm to him. He loved playing High School football and baseball, and dating his life-long sweetheart, Adrienne Dance. After graduating in 1950, Leonâ€™s Mother rented their farm and she told Leon to pursue his dream.

In Jan 1951 Leon joined the United States Air Force receiving basic recruit training at Lackland AFB, TX, then to Wichita Falls, TX at the heavy bomber B-29 Specialist School and Flight Engineer School. While in Wichita Falls, TX, Adrienne joined Leon and they were married Jun 23, 1951.

Leonâ€™s military career extended through the Korean and Vietnam Wars. Some of his missions included, Special Operations dropping leaflets and money over South Korea, working for the CIA, Nuclear Testing Squadron, Navigators Training, Air Vehicle Control in Maintenance Control over 300 planes, and in charge of the 3rd Bomb Wing B-57 Aircraft Maintenance which included 68 B-57 planes and 305 men.

Leon and his family lived a full and happy military life, living in Japan and the Philippines. He also played baseball in Japan, football in the Philippians and oversaw the care of 60 Pigney orphan boys.

In May 1965 Leon almost lost his life while stationed at the Bien Hoa Air Base in South Vietnam. There was a horrific explosion on base where 105 men were severely wounded and 28 died. â€œAdamson, totally disregarded his own safety as he returned to the blazing hell of smoke, flying bomb fragments and exploding shells.  Though he was knocked flat repeatedly from concussions, wounded countless times by shrapnel and severely burned, Leon Adamson conducted rescue operations throughout the series of explosions and chaos until he was removed from the scene and flown to a hospital in the Philippines. Leon was not expected to live.â€ wrote Elaine Shepard, War Correspondent â€œThe Doom Pussy IIâ€.

In Jun 10, 1967, after seventeen years of service, Senior Master Sergeant Leon E Adamson, was given a full Military retirement receiving the Airmanâ€™s Medal for uncommon gallantry during his rescue operations at Bien Hoa.

Leon went back to school receiving a Bachelorâ€™s degree from St. Maryâ€™s University in San Antonio, TX with a Teaching Certificate in History and English. After two years of teaching in Texas, he moved his family back to Aberdeen and taught English and History for 14 years at Aberdeen High School. He also started the Girlsâ€™ Basketball program and Ski Club, driving the bus to every away game and ski resort while coaching.

Leon retired from the Aberdeen School District in 1986 and joined the Rain and Hail Insurance Company starting as a Claims Advisor and finally the Executive Vice President of the Western Division, retiring in 1993.

Leonâ€™s love for flying extended after his military career. At one time he was part of a group owning five planes. He flew family and friends to many destinations for many years.

After completing radiation for carcinoma and chemotherapy for lymphoma, Leon died July 8, 2017 cancer free. He bravely fought many life battles, never complaining. Leon loved his wife Adrienne, his military career and was extremely proud of his three sons, Mark, Mike and Randy and their personal military choices. He was and is loved by his family and many friends and will be warmly missed.

Leon was preceded in death by his parents, brother and sister, loving wife Adrienne, and son Randy. He is survived by his sons, Mark (LesLee) and Mike (Tamara) all from Utah and many grandchildren and great-grandchildren.

A graveside service will be held Friday, July 14, 2017 at 11:00 at the Springfield Cemetery. Following the service everyone is invited to a gathering at the Lakeview LDS Church for lunch and a sharing time of stories about Leon and his colorful life.

To order memorial trees or send flowers to the family in memory of Leon E. Adamson, please visit our flower store.