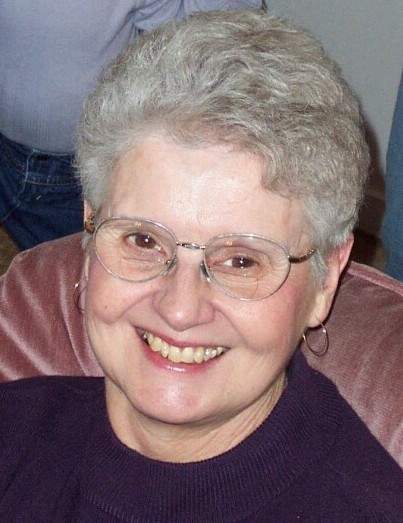 Linda was born on January 13, 1941 in Council, Idaho, the youngest of three children born to Geraldine and James Keckler. The family lived in several towns in western Idaho before settling in Glenns Ferry. In 1946, when Linda was just five years old, her father was killed in an accident while working on the Union Pacific Railroad. Linda’s mother sent the older siblings to live temporarily with relatives while Linda and her mom moved to Boise, where her mother attended cosmetology school and the two lived together in a room on the top floor of an old mansion across the street from Boise High School. This time helped seal a very close daughter/mother bond that would last their lifetimes.

After graduation, Linda’s mother opened a beauty shop in Glenns Ferry and the family was reunited. In 1949, Linda gained new siblings when her mother married Jay B. Fulwyler, who had two young sons. The extended family soon moved to Pocatello, settling on Garfield Street. Linda attended St. Joseph’s Catholic School and Pocatello High School, graduating in 1959. While in high school, Linda worked at the Chief Theater in downtown Pocatello, and according to family lore, she tripped a handsome young man who caught her eye. She eventually met that young man, Pat Rowe when she enrolled at Idaho State College, the forerunner to Idaho State University.

While studying at Idaho State College, Linda was an active member of the Gamma Phi Beta Sorority and was employed by Saga foods, which provided meal service at the student dining halls. Linda was working at the ISC Student Union when Pat worked up the courage to ask her out. Linda turned him down because she already had plans, but Pat persisted, and the next week the two had their first date.

After Linda’s freshman year of college, she embarked on the first of dozens of adventures that would take her throughout the country and around the world. She landed a job as a waitress working at a lodge in West Yellowstone, Montana, serving tourists who arrived by train. After spending the summer in Yellowstone, Linda returned to Idaho State College and graduated in 1961 from Idaho State’s Trades and Technology program, where she trained to be a legal secretary. Following graduation, Linda began the next big adventure when she agreed to join Pat in the Philippine Islands as a Peace Corps volunteer.

Both Linda and Pat were inspired by President John F. Kennedy and his call to service. Pat was among the first group of volunteers to join the newly formed Peace Corps and after traveling to the Philippine Islands, he wrote and convinced Linda to join him there. The couple undertook their first big adventure together and were married on July 21, 1962 in the Malate Catholic Cathedral in Manila. They loved their time in the Philippines, making lifelong friends while developing a deep understanding of the daily struggles and a feeling of empathy of those living in developing countries. Their time as Peace Corps volunteers ended in July 1963, when Pat took a staff training position with the Peace Corps in Puerto Rico. The family lived in Camp Radley near Utuado, Puerto Rico, located in the central mountainous region of the island known as La Cordillera Central. It was in Arecibo that Will, the first of three children, was born to Linda and Pat in early 1964.

In August 1964, Pat’s staff position with the Peace Corps ended, and the family began their journey back to Idaho. Linda and Pat returned to the United States and took delivery of a brand new Volkswagen Bug in Newark, New Jersey and launched yet another adventure by driving west through the Great Lakes region, up into Canada, and finally toward home in Idaho, camping with their young son in a canvas tent along the way.

After the family returned to Pocatello, Pat enrolled in a Master’s program at Idaho State, and Linda established their new home in a small trailer across the street from Mountain View Cemetery, where young Will would take his first steps. Once Pat finished his required coursework, the family took their next step and moved to Aberdeen, where Pat taught history at Aberdeen Junior High and later government, speech and debate at Aberdeen High School. Over the years, Linda occasionally filled in as a substitute teacher as Pat began to assume a larger role on the family farm near American Falls.

During their time in Aberdeen, Anna was born to Linda and Pat in August 1965, and two years later, the youngest of the family was born when Julie arrived in October 1967. That same October, the family moved into their home on the farm, which remains the family home to this day.

Linda was a city girl from Pocatello who transformed into a farm girl. Linda canned fruit and vegetables, fed harvest crews and pitched in wherever needed. She became her father-in-law’s trusted hand, driving his cattle truck to market and bottle feeding calves at home; sometimes bringing them into the house to save them from the cold.

While on the farm, Linda honed her cooking and baking skills and often showed her love and care through delicious foods and special baked treats. She was always a ready host for large family gatherings, serving her legendary spaghetti in the winter and potato salad at summertime picnics. Linda also frequently volunteered at her children’s schools, where her children have fond memories of the custom treats she made for classmates on special days.

Linda was devoted to her family. She ferried her children to music lessons, 4H meetings, and state fairs, and was always ready to take her children and their cousins on adventures to visit Linda’s parents in Island Park.

Linda was also active with the St Mary’s Altar Society and volunteered as a Pink Lady at Harms Memorial Hospital. Linda enjoyed volunteering at the hospital, and when her children were in high school, she took a part-time job there in the medical records department.

After the kids were grown, Linda and Pat resumed their own adventures, travelling worldwide to work with farmers in Egypt, Kazakhstan, the Philippine Islands, Russia, Bolivia, and countries across western Europe. Their projects were aimed at improving farm practices using resources available to local farmers and covered all facets of farming, from bookkeeping and irrigation to storage and insect control.

Linda was a natural communicator, who found ways around language barriers and established friendships wherever they visited. While traveling in these faraway places, Linda did the driving and Pat did the map reading. In fact, Linda mastered driving on the left side of the road and could navigate a round-about like no one’s business.

Between and after these trips, Linda doted on her grandchildren and cared for her mother-in-law and her mother, bringing them each into her home during their final years. Linda’s own later years were stolen from her by Alzheimer’s requiring she live in assisted care starting in 2014.

Linda Rowe was a free-spirited, courageous and gracious woman who enjoyed her life, loved her family, and cared deeply about the friends she made throughout the world. She is survived by her husband Pat, her children Will (Ana) of American Falls, ID, Anna (Alan Benson) of Austin, TX, and Julie Rowe of Pocatello, ID. Her grandchildren, Dacia Sil Yang, Emmaline and William Benson, Bill and Abby Rowe, and her brother Chet (Shelia) Fulwyler, and many nieces and nephews.

She was preceded in death by her parents, her brother Hugh Keckler, her sister Katheline Keckler Sandoval, and her brother Jim Fulwyler.

Linda’s family would like to thank Dr Mills and her team at Heritage Home and Health Hospice, as well as the staff at Edgewood Spring Creek Manor in American Falls, for the wonderful care they provided to her in the last years of her life.

The Graveside service will be held on Saturday, October 17, 2:00pm at the Falls View Cemetery in American Falls, Idaho. In lieu of flowers, please contribute to a charity of your choice or to Alzheimer's research.

The family would like to thank Dr. Mills and Dr. Edgewood for their kindness and professionalism in caring for mom.  Memories and condolences may be shared at DavisRoseMortuary.com.

To order memorial trees or send flowers to the family in memory of Linda Genne Rowe, please visit our flower store.