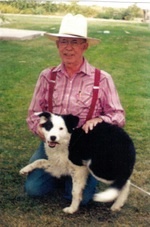 Lorin was born in Salem, Utah on December 28, 1918 to Nellie & James Warner.  He was the youngest of 9 siblings.  They moved to Idaho when he was a young boy & his dad farmed in the Arbon Valley area, later moving to Aberdeen.  His dad passed at a young age & Lorin quit school in the 8th grade to help the family.  At the young age of 17 he put a down payment on the farm with his brother’s George and Glenn.  Their mother also was on the farm with them.

He met the love of his life, “his Little Red Head” Wanda Welch, while pickin potatoes during potato harvest.  They were married on March 6, 1942 in Pocatello, Idaho.  They were sealed July 15, 1942 at the Logan Temple.  To this union were born 3 children Gary, Peggy & Wayne.  Lorin and Wanda worked side by side on the farm for 68 years.  Lorin was a member of the Church of Jesus Christ of Latter-day Saints.  He served in several different callings. Lorin & Wanda worked at the Aberdeen LDS Church as custodians for 6 years.  As their health started to fail, they moved to Spring Creek Assisted Living in July of 2009.

Lorin was preceded in death by his wife Wanda, his parents, three brothers Roy, George and Glenn, three sisters Nellie, Jenny, Reva, Vera, and a baby sister who died at three and a half month  Irva Maud;  and one great grandchild.

The family would like to take the opportunity to thank all of the staff at Spring Creek for the excellent care they gave our dad.  He loved all of the girls there.  Also thanks to Hospice for extra care and love they showed him.

To order memorial trees or send flowers to the family in memory of Lorin S. Warner, please visit our flower store.