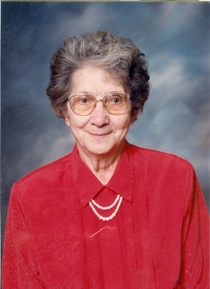 Louannie H. Youngstrom 95, passed away peacefully at Edgewood Spring Creek on the evening of August 9, 2017.   Louannie was born Dec. 2, 1921 to Heber Levi & Sarah Ann Hammon of Ammon Idaho.  She was the 10th of 12 children.  She graduated from Midway High School in 1940 near Menan, Idaho.  In 1942 Louannie started cosmetology school. After she graduated she worked at Fashion Beauty Shop.
On April 28, 1944 Louannie married the love of her life Woodrow Youngstrom in Rigby, Idaho.   They had 23 days together before Woodrow left for Europe to serve in World War II.  He returned 2 years later.
After being home for a short time Woodrow and Louannie moved to Aberdeen, Idaho on March 7, 1946 to work on the Ben Johnson Farm.  Where they had 2 sons Roy & Lyle.  11 years later Woodrow & Louannie bought the Herb Lowe Farm in Aberdeen on Fingal Road where they farmed and raised their family.  Louannie ran a successful beauty salon in Aberdeen for 16 years.
After Woodrowâ€™s passing on October 3rd, 1981 Louannie enjoyed traveling with many of her friends.  They went to Europe, California, back east and to South Dakota.  A few years later she moved into town where she remained until January of 2017.  Where she then moved to Edgewood.
Louannie was a member of the Aberdeen Art Guild.  One of her greatest talents was her beautiful paintings.  Later, she worked as a teacherâ€™s aide and a librarian for several years at the Aberdeen Elementary.  She also served in the LDS Church and the community.
She was preceded in death by her husband Woodrow and son Roy.  She was the last of 12 siblings.
She is survived by her son Lyle (Debbie) of Aberdeen and her daughter-in-law Georgiann of Twin Falls, 6 grandchildren, Anita (Scott) Gordon, Brian (Marci) Youngstrom, Tracy (Shayne) Jensen, Michelle (Doug) Lewis, April (Brent) Workman, Joy (Leland); 12 great grandchildren, Shay, Cody& Jaxon Workman, Logan & Nathan Jensen, Hannah & Reilley Lewis, Jessica & Colby Gordon, Kale, Brennen & Ainsley.
A viewing will be held at 9:00 AM August 14, 2017 at The Church of Jesus Christ of Latter-day Saints, Aberdeen 1st Ward, 149 W. Central.  The Funeral service will follow at 10:00 AM at the church.  Interment will be at 2:00 PM at the Annis Little Butte Cemetery, 3883 E. Menan Lorenzo Highway in Annis.  Condolences and memories may be shared at www.davisrosemortuary.com.

To order memorial trees or send flowers to the family in memory of Louannie Youngstrom, please visit our flower store.
Send a Sympathy Card