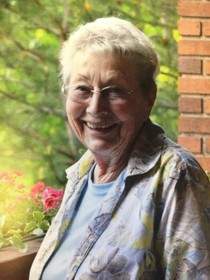 Madaline Mae Crosby was born January 27, 1932 to Orville and Lois Olmstead Pitney in West Los Angeles, California. She had a sister, Verna, and three half-brothers; Chuck, Orville, and Walt. She married Melvin Crosby on September 4, 1948, and made a home in California where they had four children: Kathy, Ron, Debbie, and Cary. Madaline adored babies, and took pride in raising her own. In 1957 they entered a veterans drawing, and drew a farm in Minidoka, Idaho, which was the opposite of living in California with its dry dusty desert, harsh winds and cold snowy winters out in the middle of nowhere. Madaline stayed alone with her four young children while Mel went to California to work in the winters. While she was there, she kept the kids fed and fire going and defended the homestead from the coyotes that tried to come in and get the chickens. In 1968, Madaline became a statistical reporter for the USDA and later on became the supervisor for all of Southeast Idaho. While at that job, she developed many lifelong friendships. In 1989 Mel and Madaline built a home in Jerome, Idaho. Madaline loved to have her hands in the dirt, she took much pride in the beautiful yard and garden that she meticulously maintained. She had a big heart, and especially loved all animals, large and small. She and Mel took up square dancing while in Jerome, and added many more friends to their list. After Mel passed away in 2010, Madaline moved to American Falls with her daughter Kathy, and took a few trips to stay with her sons in Louisiana. She moved into Edgewood Springcreek Manor where she lived until she passed away on December 24, 2016.
Madaline loved her family and friends, and nobody that ever met her didnâ€™t like her sweet, charming, charismatic personality. She will be dearly missed. She was preceded in death by her husband Mel, her parents, her sister Verna, her brother Orville and granddaughter Kristy. She is survived by her brother Chuck Pitney of Washington, brother Walt Pitney of Washington, her children Kathy (Tee) Lindauer of American Falls, Ron (Ruth) Crosby of Haughton, Louisiana, Cary (Debbie) Crosby of Haughton, Louisiana, and Debbie (Jerry) Emery. She is also survived by 12 grandchildren, 35 great-grandchildren, and 3 great-great-grandchildren.
A celebration of life will be held for Madaline on Friday, December 30th, at the American Falls Library, 4-6 pm.
To order memorial trees or send flowers to the family in memory of Madaline Mae Crosby, please visit our flower store.