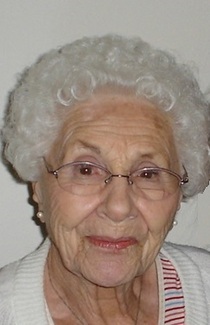 Margaret was born on February 20, 1918 in Rockland, ID to Perry Cox and Rachel Hunter Cox.  She was raised and attended school in the Rockland Valley.     They were blessed with one son, Donald Lee Gilson.

Margaret spent many years as a waitress in American Falls, many of them at the Hilltop Cafe.  After retiring, Mert and Margaret spent many years traveling to Arizona during the winter to escape the cold, windy Idaho weather.  She enjoyed crocheting, gardening, camping and fishing, and spending time with family and friends.  She was also an excellent cook.

Graveside services will be held at 11:00 a.m. on Friday, July 1, 2016 at the Falls View Cemetery.  Condolences, memories and photos may be shared at www.davisrosemortuary.com.

To order memorial trees or send flowers to the family in memory of Margaret Ora Gilson, please visit our flower store.