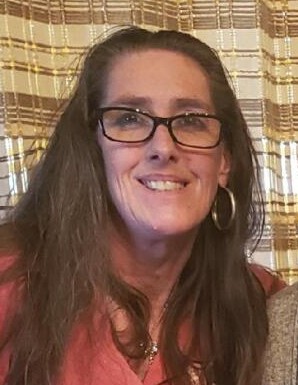 Mari Michelle Marino or as most people knew her, “Mickey”, passed away early on the morning of April 20th, 2021 after her short but hard battle with brain cancer. She was born in Richmond, California on June 15th, 1967 to Mel and Cecilia Goodin.  She was the middle child and being so, quickly became the most stubborn and most frequent visitor to the ER.

Mickey was raised in Vacaville, California and genuinely loved living and growing up in California.  It was here that she managed to break her collar bone not once, but six times.  It took a while to heal, made harder by her hard driving nature.   While in Vacaville, she played basketball, volleyball, and graduated from Vacaville Christian Academy High.  It was here that she also embarked on one of her passions, work! She worked her first job at the age of 17 at Murillos Restaurant. Although very humble, Mickey prided herself on her work ethic and working hard her whole life.  She absolutely loved being at work and staying busy.

It was in California that Mickey gave birth to her eight children.  The oldest, Amanda, was soon followed by Amber, Ashley, Jonet, Charles, Cody, Leionni, and Khalina.  Charles and Cody were twins and unfortunately Cody passed away not long after birth.

In the mid 2000’s Mickey moved to American Falls, Idaho where her parents had moved a number of years earlier.  She started working at Cardinal Market and transitioned to Ken’s Food Market when Cardinal closed.  During these years she met some of her closest friends and members of the community.  One of Mickey’s most endearing qualities was her ability to talk and get to know just about anyone.  The past few years Mickey worked at Amy’s Kitchen in Pocatello and again met many new friends and became a part of the community at Amy’s.

Being from California and an avid football fan, Mickey fell in love with the San Francisco 49ers.  She stuck with them through the bad times, not faltering in her loyalty the slightest.  Mickey was the definition of a true fan and had many household items and clothing adorning the famous 49ers logo.  She was as loyal a fan as any sports team could hope to have.

It is with a heavy heart that we say goodbye to Mickey.  She was a daughter, a sister, a mother, a grandmother, and a true friend who will be deeply missed. We know she is visiting and catching up with the ones who preceded her in moving onto the next adventure. These include her four grandparents and her son Cody. We are confident they are getting along well!

A celebration of Mickey’s life was held Saturday April 24th, 2021 in American Falls, Idaho with her family and numerous friends attending.

To order memorial trees or send flowers to the family in memory of Mari Michelle Marino, please visit our flower store.
Send a Sympathy Card