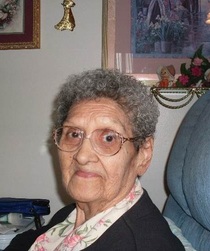 She was born on 17 June 1932 in Mercedes TX. She grew up in the Texas Valley and met and married Orfelio E. Perez on 20 August 1950 where they had their first two children Norma and Neo­mi; they relocated to Ab­erdeen Idaho in 1956. In Idaho they had two more children Mary Ann and Sylvia and made a living together in Aberdeen and assisted in raising An­drew Guerra, a Nephew. She raised her children to school age and began working at JR Simplot and quickly advanced to Lead; she retired after 30 year in 1995. She was an avid activist in the com­munity coming to the aide of migrant workers in and around the Aber­deen Idaho area. She be­came an interpreter and voice for the Mexican community.

She was a devoted daughter, mother, great-grandmother and a faith­ful friend and companion and will be truly missed. Until we meet again you will remain forever in our hearts.

The Rosary will be at 9:00 a.m. with the Funer­al Mass of Celebration at 10 a.m., Saturday, De­cember 21, 2013, at the Presentation of the Lord Catholic Church, Blessed Sacrament Chapel in Aberdeen with Fr. Ela­dio Dieyra as Celebrant. Interment followed the mass at the Aberdeen Cemetery. Condolences and memories may be shared at www.davis­rosemortuary.com. Memorials can be made to Portneuf Animal Welfare Society Inc., PO Box 1603, Pocatello, ID 83204.

To order memorial trees or send flowers to the family in memory of Maria Perez, please visit our flower store.
Send a Sympathy Card