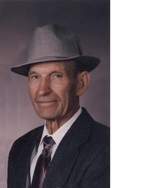 Maril farmed most of his life.  In 1947, he built a family home on an 80 acre farm and gravity irrigated 360 acres for many years by himself.  In 1960, Maril sold the farm, built a home in Aberdeen and started working for Simplot Soil Builders where he managed the plant in American Falls.  After 14 years, he left Simplot and drove school bus for the Aberdeen School District and many high school wrestling matches.

Maril retired in 1984 to fully enjoy his family and many hobbies.  He loved to hunt, fish, camp, work with wood and spent many hours in his yard and garden.  Maril was preceded in death by his wife Julia, his parents, siblings, daughter Loah Thompson and great-grandson Stockton Welch.

A viewing will be held at The Church of Jesus Christ of Latter-day Saints, Aberdeen first ward on Sunday, April 8, from 6:00-8:00 p.m. A second viewing will be on Monday, April 9, from 10:00-10:45am, followed by the funeral service at 11:00 am.  Interment will follow the service at the Aberdeen Cemetery.    Condolences and memories may be shared at www.davisrosemortuary.com.

To order memorial trees or send flowers to the family in memory of Maril L. Beck, please visit our flower store.