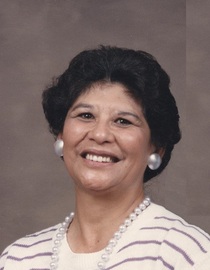 Martha worked for Simplot for 32 years retiring in 1993.  Martha was involved in the Catholic Church and very involved in her childrenâ€™s lives.  She loved sewing, crocheting, quilting, hunting and fishing.  She enjoyed her lifelong friendships she made while working at Simplot.

She is survived by her daughter Irma May (Kenny), Lakeland, Florida; sons, Eloy (Linda), Aberdeen, Idaho; Ray (Louise), Pocatello, Idaho; Richard (Cathie ) Shelley, Idaho and Isaac, Springfield, Idaho; 20 grandchildren, 45 great grandchildren, 9 great-great grandchildren, and her brother Philip Pena of Aberdeen.  The Cardona family would like to include their extended family the Reeds and many nieces and nephews.

She was preceded in death by her husband Eloy, her parents, an infant daughter, Irene; son David, brothers Lee, Jesse and Frank; sisters Evelyn, Lupe, and Adela; her grandson Michael Cardona, great granddaughter Bridgett Powell and 2 other great grandchildren.

Services will be at Blessed Sacrament Catholic Church, 667 S. 4th W. Aberdeen, Idaho.  On Tuesday, October 7, 2014 the Rosary will be at 7:00 PM and The Vigil will be 7:30-8:30 PM. On Wednesday Oct. 8, a vigil will be at 11:00 AM with Mass following at 12 noon. Interment will be at the Aberdeen Cemetery.  Memories and Condolences may be shared at www.davisrosemortuary.com

To order memorial trees or send flowers to the family in memory of Martha Cardona, please visit our flower store.