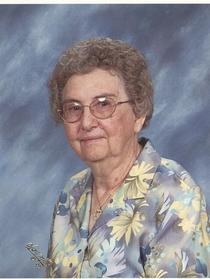 Martha Marie Hofmeister Kopp, 91, American Falls, Idaho, went home to be with the Lord on August 17th, 2014, after an extended illness.
Martha was born July 27, 1923, in American Falls to Gottfried and Katharina Hofmeister. The youngest of 10 children to her parents who were German immigrants. She was raised on the familyâ€™s dry farm in Pleasant Valley, and attended a German grade school in Pleasant Valley and later attended high school in American Falls. She married George Benard Kopp in American Falls on November 4, 1942. George and Martha farmed in the area their entire married life. George passed away December 23, 2003.
She was an active member of St. Johnâ€™s Lutheran Church in American Falls and participated in the Ladies Aid and various other church activities.
Martha was an excellent homemaker and cook. She loved her vegetable and flower gardens.
Martha is survived by her son, Richard Kopp (Edith) of American Falls and daughter, Marian Pena (Lee) Lawrenceville, Georgia, grandchildren, Tracy Taki (Doug) of Pocatello, Troy Miller (Susan) Astoria, Oregon, Tim Miller of Pocatello, Heidi Hobbs (Brandon) of  Boise, Bryan Kopp (Nichole) of Pocatello, Brooke Bischoff (Garr) of Flowery Branch, Georgia, David Pena of Atlanta, Georgia, Damian Jacobson (Kami) of Pocatello, and Jeffrey Winberg of Aberdeen  10 great grandchildren, 3 great-great grandchildren, along with many nieces and nephews. She was preceded in death by her husband George and two daughters Darlene Miller and Shawna Winberg as well as 4 brothers and 5 sisters.
Services will be held Thursday, August 21st at 11:00 am at St. Johnâ€™s Lutheran Church American Falls, with Rev. Jon M Beake officiating. A viewing will be held from 6:00-8:00 pm on Wednesday, August 20th at Davis-Rose Mortuary, 170 Idaho St. in American Falls.  Additional viewing time will be at the church from 9:45 to 10:45 am before the service.  The family would like to extend our thank you to the staff at Edgewood Springcreek facility for their kind compassionate care.
Any memorial donations may be sent to St. Johnâ€™s Lutheran Church, PO Box 55, American Falls, ID 83211. Condolences and memories may be shared at davisrosemortuary.com.

To order memorial trees or send flowers to the family in memory of Martha Marie Kopp, please visit our flower store.