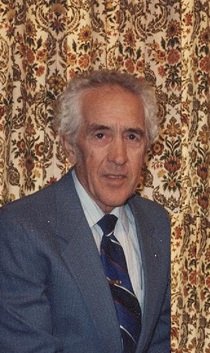 Martin Emil Brucker was born May 17, 1926 in Balgonie, Saskatchewan, Canada to Karl & Lena Lindenbach Brucker.  His parents were immigrants from Austria.  The youngest of four, he had three older siblings; Henry, Helen, and Louise.
Martin went to CTI (Christian Training Institute) in Alberta, Canada from 1947-48.  He met his wife Silvia of 62 years and they were married on July 20th, 1952 in the American Falls, ID Congregation Church in old town American Falls.  Martin and Sylvia later went on to continue their education at Idaho State University to study German and music.  Their only child Violet Rosina Brucker Isaak, was born December 2nd, 1953.  Martin farmed in the American Falls area for the duration of his life where he raised wheat, alfalfa and sugar beets.  Farming was the passion of Martinâ€™s life.  He also dedicated his life to helping others and was a lifetime member of the Gideonâ€™s, an organization that distributes bibles to hotel/motel rooms, colleges, and high schools, among others.  Martin was also very musical, and played the piano, trumpet and Hawaiian guitar. Martin and Sylvia volunteered every Sunday morning for approximately 30 years holding services at the American Falls Hospital and at Spring Creek Manor.  They would also sing duets on many occasions.
As a couple, Martin and Silvia served in Maps, an Assembly of God organization that would build schools and churches throughout the world.  They traveled together to Africa, Hawaii, Truk Island, and the Marshal Islands.  As a couple they dedicated time, money and resources to help others and made it a priority to help those less fortunate.
Martin will always be remembered for his life of service, his dedication to his family, and his work ethic.  He was one of the hardest workers you would ever meet and it showed by the farm he built and the things he accomplished during the duration of his farming career.  He was the best Grandpa and Great Grandpa you could ever ask for and will be dearly missed.
Martin is survived by his daughter Violet Isaak (LaMar); his two grandchildren Conrad Isaak (Adriane) of American Falls, ID and ReNae Patberb (Ron) of Columbus, IN and one great-grandchild Asher Isaak.
The funeral service will be at 10:00 AM Tuesday, November 22, 2016 at American Falls Christian Fellowship, 329 Harrison Avenue, American Falls. There will be a viewing from 6-7:30 PM Monday, November 21, 2016 at Davis-Rose Mortuary, and at 9:00 AM before the funeral at the church on Tuesday.  Condolences and memories may be shared at www.davisrosemortuary.com.

To order memorial trees or send flowers to the family in memory of Martin E. Brucker, please visit our flower store.
Send a Sympathy Card